This is review number three hundred and ninety eight. This anime is part of the Spring 2017 lineup, and it’s called Tsuki ga Kirei or “The Moon is Beautiful” or “As the moon, so beautiful”. It’s a twelve episode anime about life. It’s just straight up about life, and it’s beautiful. This review is long, so let’s read on.

END_OF_DOCUMENT_TOKEN_TO_BE_REPLACED 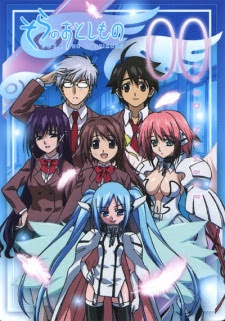 END_OF_DOCUMENT_TOKEN_TO_BE_REPLACED

This is review number two hundred and sixty four. This show is part of the Fall 2013 lineup. I’ve significantly slowed down in my reviews but I guess it’s time to go on overdrive. Let’s see if I can dust off the Fall lineup before April ends. In the meantime, I’ll be reviewing this show called Unbreakable Machine Doll. It’s a twelve episode anime about a boy and his highly sexualized automaton robot. Oh, and there are also a bunch of cute girls and some fighting. Let’s read on. END_OF_DOCUMENT_TOKEN_TO_BE_REPLACED

This is review number two hundred and fifty. This anime is part of the Winter 2013 lineup. I actually watched this show when it was airing and re-watched it again to write this review. I’ll try to crunch as much anime as I can before this vacation of mine ends. Anyways, the anime I’ll be reviewing is Chihayafuru 2. It’s that cute karuta sports game that has three beautiful main characters. It’s a twenty five episode anime about the competitive sports of karuta. I love this anime back when it aired on the Fall 2011 lineup and I think the second season is a long time coming. Is it worth the wait? Did the second season meet the awesomeness of the first season? Let’s read on. END_OF_DOCUMENT_TOKEN_TO_BE_REPLACED

This is review number two hundred and forty five. This anime is part of the Summer 2013 lineup. First of all, the letter “E” in my keyboard just broke off. It’s frustrating trying to write a review where you have to type to a space where a key was once in. It’s like the anime gods want me to stop reviewing. Well I won’t. Not until I reached my goal. Anyways, the anime I’ll be reviewing is called Fantasista Doll. For some odd reason, there are two doll themed anime for this season. This one is a bit different though. This is a twelve episode anime about a girl with a cellphone that reads cards that summons some girls. It’s a pretty cool thing, actually, but the show somehow botched it. Let’s read on.