This is review number four hundred and twenty three. This anime is part of the Fall 2014 lineup. The anime I’ll be reviewing is called Grisaia no Kajitsu or The Fruit of Grisaia. It’s a thirteen episode anime about a guy and some girls, some dog meat and a lot of blood. Yeah, f*cking awesome show. Let’s read on. 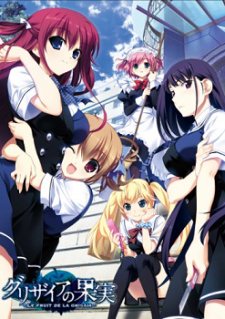 END_OF_DOCUMENT_TOKEN_TO_BE_REPLACED

This is review number two hundred and forty six. This anime is part of the Summer 2013 lineup. As it would seem, I only have three more regular series left before I close this lineup. Thank the almighty Pikachu that it’s almost over. I now moan in pain for the Fall 2013 lineup which has a ton of anime as well. Anyways, the anime I’ll be reviewing is called Kiniro Mosaic or Golden Mosaic. It’s a twelve episode anime adapted from a four panel manga about four cute girls doing cute things in a slice of life wrapper. It’s the obligatory slice of fluff anime every lineup strangely has. This one is pretty good though. Let’s read on.