This is review number four hundred and forty two. This anime is part of the Winter 2015 lineup and it’s called Jojo’s Bizarre Adventure: Stardust Crusaders Battle in Egypt. It’s a twenty four episode anime where Dio returns and he battles an emotionless GAR character. Let’s read on. 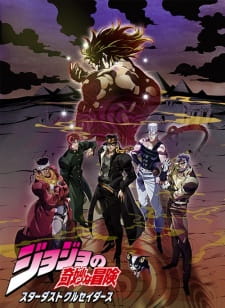 END_OF_DOCUMENT_TOKEN_TO_BE_REPLACED

Thirty three anime. I am hurting bad. I think I have three main series left and two anime shorts. The rest are on-going kid shows so I think it’s safe to close this lineup for now. I’ll need to collect my energy for Soul Eater Not and I’ll need to see the first seasons of Hanamonogatari and Mushishi before I watch it. Again, these are grouped according to their score. Anything eight and above is something I wholeheartedly recommend. Those grouped in 7s are flawed but good shows. I think most 6s are mediocre but still enjoyable to a degree. Some 5s cater to specific individual who’ll find their appeal charming despite the heavy flaws. 4s are doable but boring and 3 below are just plain bad. I think I am finally getting a good grasp of how my score system works. Anyways, click on the picture to see the review.

To those that care, I will not be moving on to Summer 2014 for now. I have unfinished business as I skipped Winter 2014 and I need to mop up Fall 2013. The perfectionist inside is insisting I come back for the shows I purposely abandoned. I will also tackle Fall 2010 as it is in my review poll for now. This’ll keep me busy for a long time. Oh, and another lineup as well. This is a lineup I dropped in favor of current lineups but I think it’s time to comeback to it. I’ll keep it secret for now. That’s that. Let me rest now.

END_OF_DOCUMENT_TOKEN_TO_BE_REPLACED

This is review number two hundred and ninety seven. This anime is part of the Spring 2014 lineup. The show I’ll be reviewing is called Jojo’s Bizarre Adventure: Stardust Crusaders. It’s a twenty four episode anime about Jojo and his journey to beat up as many people in Asia as possible. It’s a second season of an anime I really enjoyed. Is the second season as good as the epicly awesome first season? Let’s read on.