I’m mostly writing this because I realized I was watching the second season of a Winter 2015 anime. I kinda wasted my week on it, so it’s a bit frustrating. I didn’t plan on making a wrap up for July, because I was just not in the mood. Since I don’t have anything to review this week though, I decided to do it. Anyways, these are the moments. Beware of spoilers. 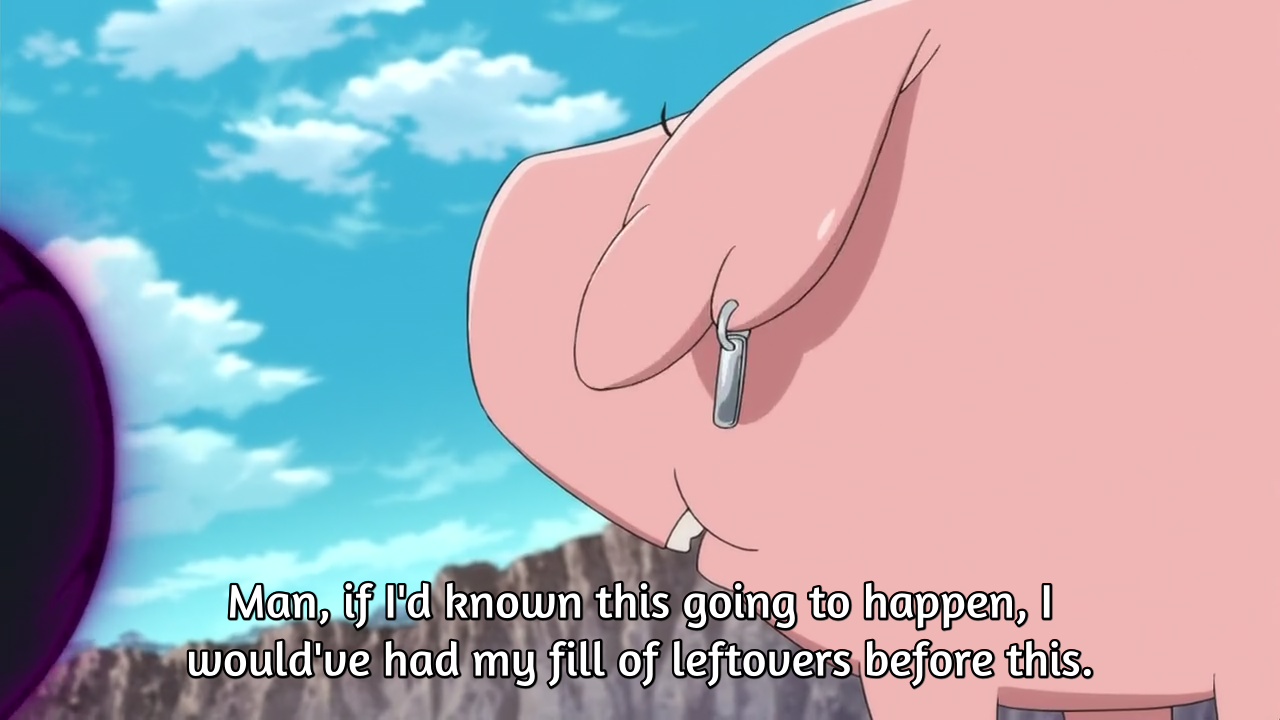 The Showdown – Madan no Ou to Vanadis

Like I said, the two shows I watched don’t really have memorable moments. I guess for this one, the only thing I remember, aside from the unnecessary fan service, is the final fight between the main character and the ultimate baddie, Thenardier. 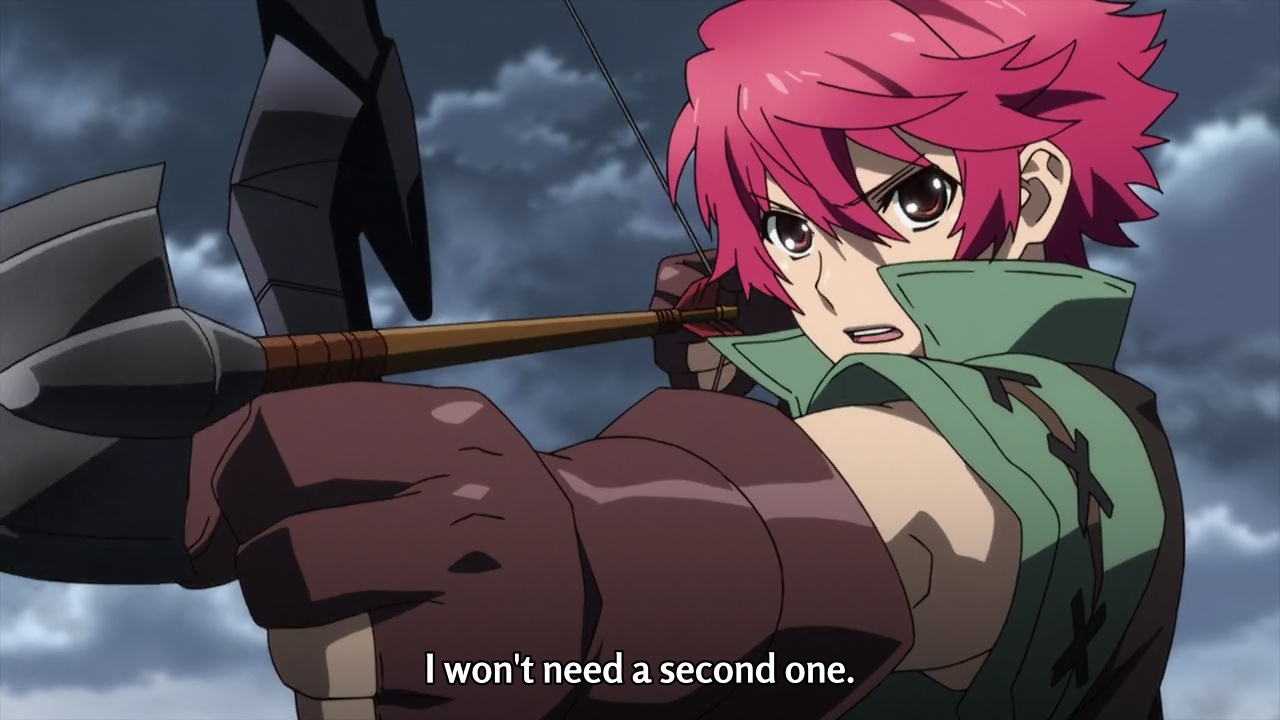 It was a straight forward showdown, but I guess the closing moments of the match deserve some love. The dude who brought a bow to a sword fight launched his last arrow, and it landed on his enemy’s forehead clean. Thenardier was also surprised that he didn’t deflect the arrow until it was revealed Vorn did some wind manipulation to get the upper hand. He wins, he got the king help him achieve a good ending and he was even bestowed a title that was mostly given to people that’ll rule the country. It was like a nice tease for a next season, and I think a lot of people would want that.

Roland the Badass – Madan no Ou to Vanadis 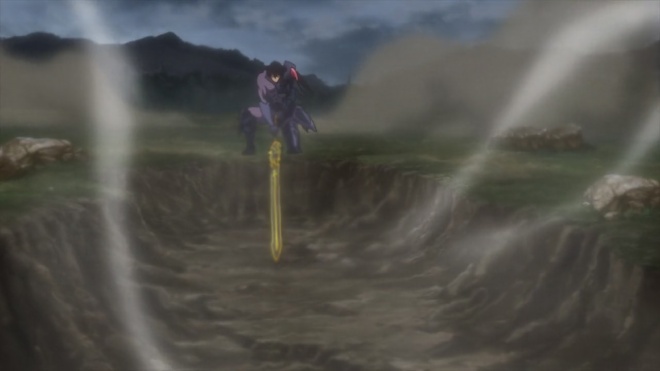 He is apparently the strongest knight in the kingdom and he took on two war maidens to prove it. This was really the best fight of the series, and it was mostly because the war maidens were seen here as humans. I hate how they just kill soldiers in the battlefield, so seeing some stand toe-to-toe with them is really refreshing. Roland’s badassery is completely negated by the next episode though when he was unceremoniously killed by thousands of bees. Like, f*cking really, you have scantily clad girls fighting dragons and the strongest male character is killed off after one episode. It’s frustrating, but a lot of cool male characters don’t stay long in this anime. It’s almost as if only female characters are needed, like what kind of anime is this? Oh yeah, it’s a gawd damn light novel. 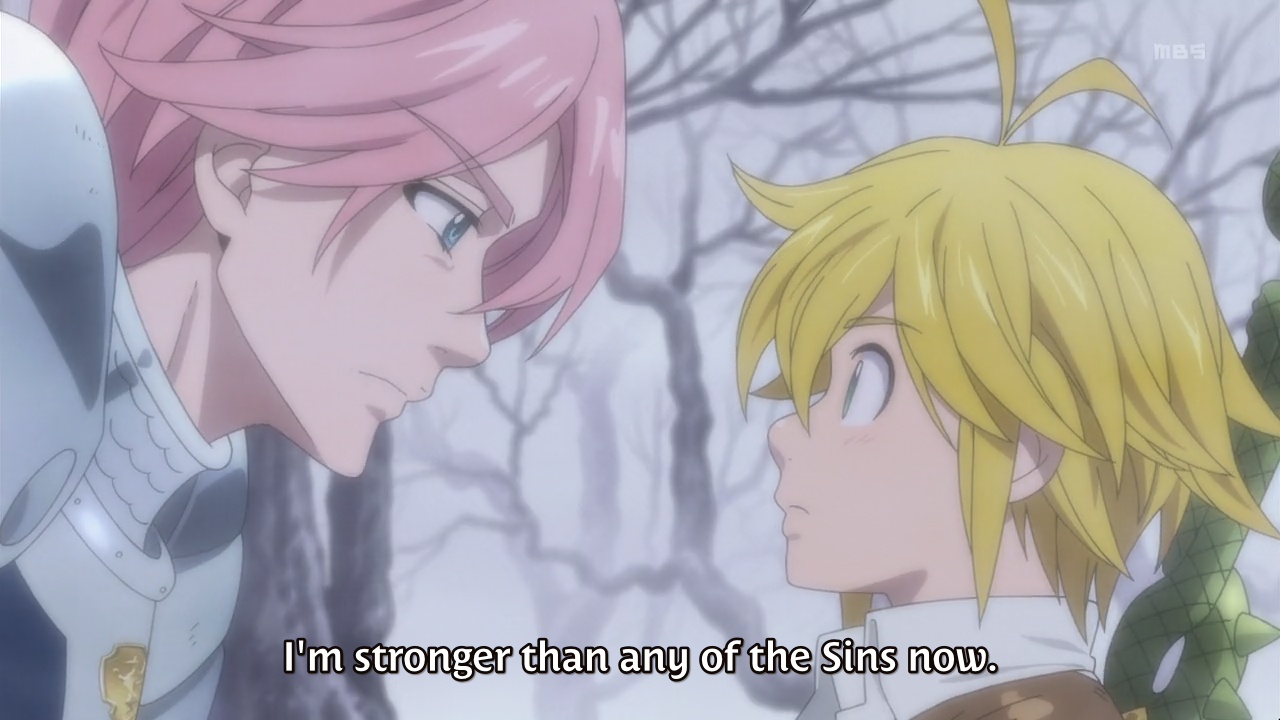 Perhaps the most satisfying way of set up and payoff is the sudden face turn of the pink haired knight in the third chapter of the anime. He was there since the beginning serving as the ultimate baddie for Melodias to eventually fight. When the fight came, we were shown a flashback and this giant twist is slapped to our faces. It turns out Gil is actually being manipulated by the even ultimate-r bad guy and Melodias has known about it since day one. The big give away is the “charm” he taught Gil when he was a kid. Whenever he feels scared or uncertain, just say “I am stronger than the Seven Deadly Sins” and then we were shown the multiple times he said it throughout the series. It was a holy sh*t moment for sure, but again, it could’ve been better. As a moment, it was amazing and it caught me off guard. See, this anime might be clunky but it makes up for it with moments like this. 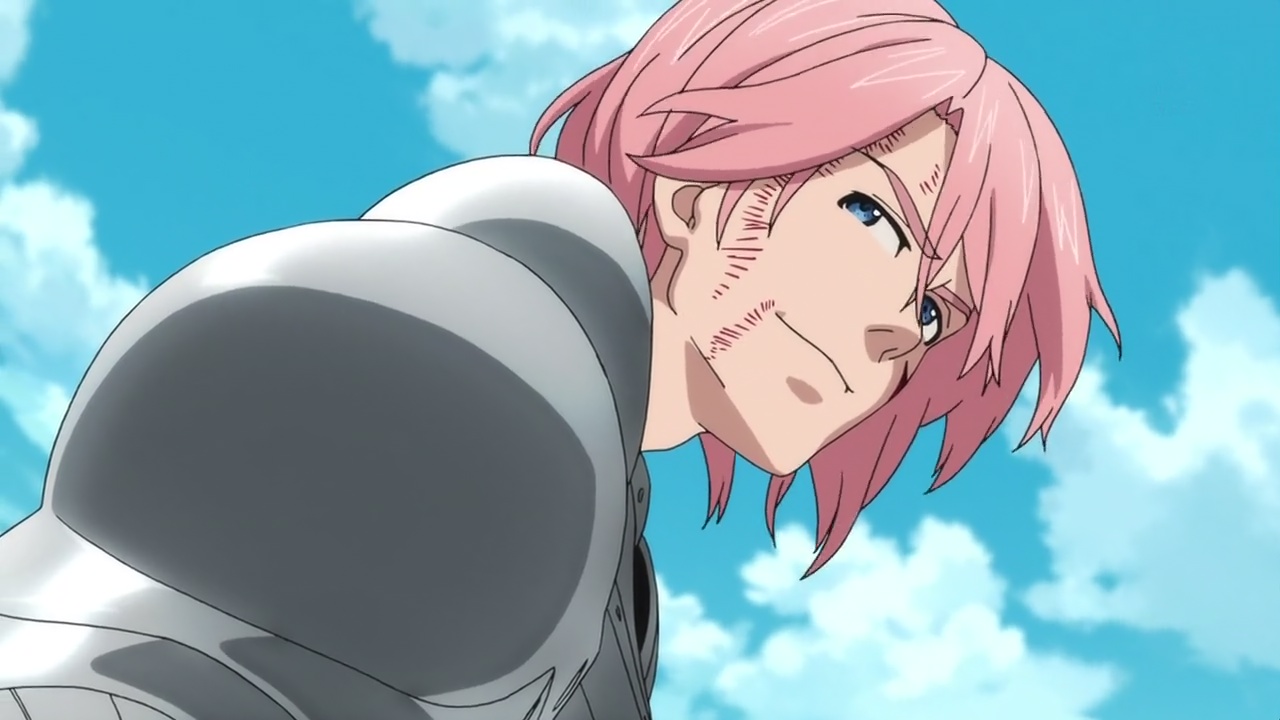 It turns out a sorceress we were just introduced to is actually controlling Gil and Melodias was able to break her control. With Gil out of his chains, he didn’t hesitate to turn his sword against the baddies and eventually help the Seven Deadly Sins fight the last boss fight of the season. I wish to see more of this dude in the next season.

There was a lot of time given to this guy and an armored person in the second chapter of the show. We all assumed that the Lust knight is in the armor and the guy is taking care of him. They had a cool bond and the guy would even read to the armored dude. It was sweet, and you don’t want the bad guy to find them. Unfortunately, a band of assassins is sent after them and the Seven Deadly Sins are roped into the mess as well. The guy soon learned the assassins only want the knight’s head, so he happily beheaded his close friend. That was a moment by itself, and the assassins quietly left afterwards. The guy told the Seven Deadly Sins to stay on guard though, because the knight is still alive. 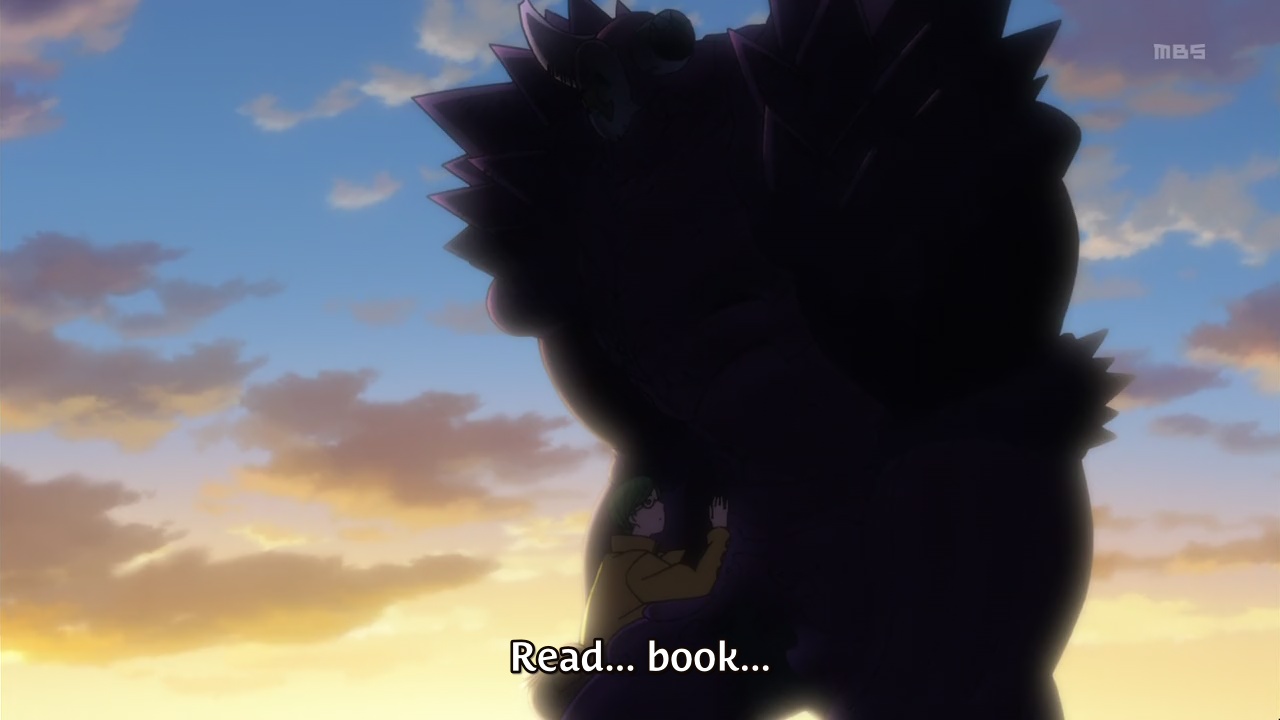 It turns out, the guy is actually the Lust knight and the one inside the armor is….well….something f*cked up. This story really took a weird turn, and you should really expect that from Lust. He is unpredictable and just plain weird. In his first fight joining the group, he was quickly stabbed to death and then suddenly revived. Boy, I want to know what the hell is up with him. Anyways, Lust actually doesn’t care about his bond with monster, since he was just curious about it. They defeated the bastard, and Lust stood in front of its dying body. The monster thanked him for being a friend, and Lust just kinda stood there fascinated that the monster considers him a friend. 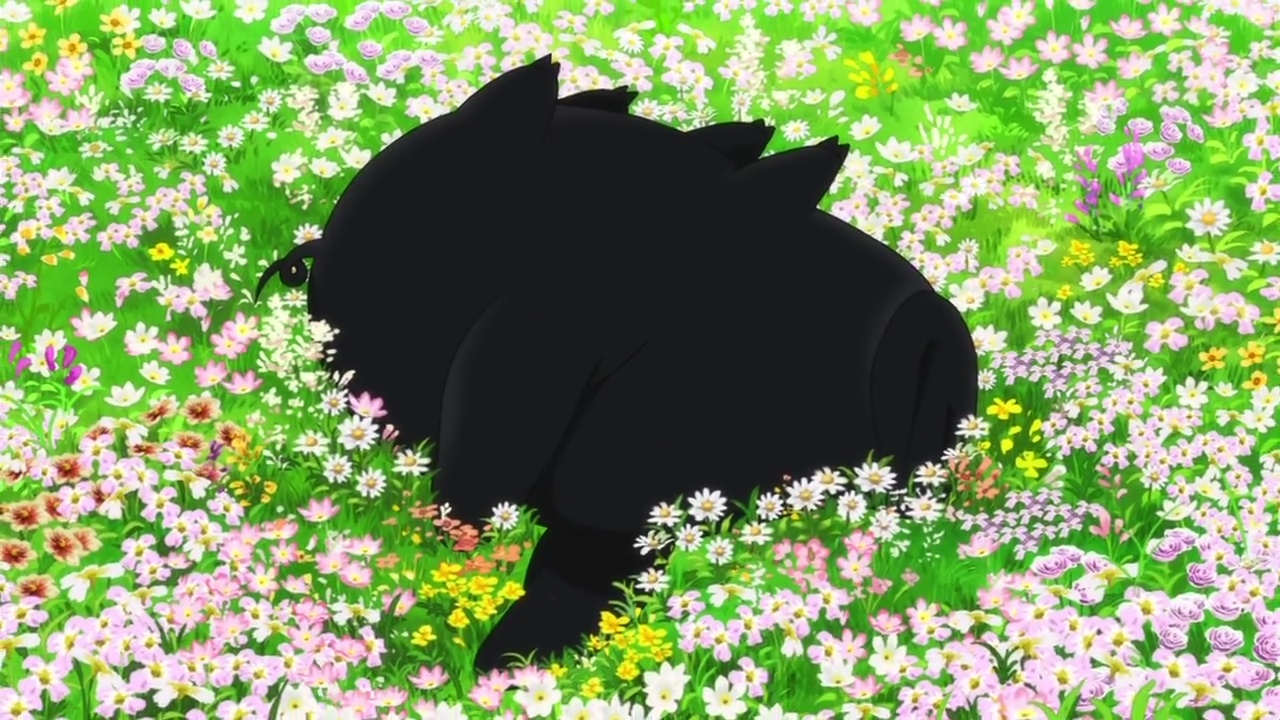 If there was one moment that really caught me off guard, it’d be this one. The pig that doesn’t fight, serves as comic relief and the mascot of the anime is killed by the final boss. It was a shock and you were waiting for the “oh no, he’s not really dead” gag to happen except it never did. The pig stood there lifeless, burned to a crisp and confirmed dead by the characters. This triggered a cut scene where the princess is actually a goddess, another twist the anime has setup since the first episode, and she unleashed a healing circle to restore everyone’s HP. This helped the group tremendously and Melodias soon killed the boss with his ultimate skill attack.

As for the pig, he was still dead.

Yeah, until he wasn’t. A part of me knew that he wasn’t really dead, but it still kinda hurt when you see him die. The series has a bunch of immortals and over leveled characters, and the one that got killed is the f*cking pig. It just wasn’t fair. He is still alive though, and the gag happened still. This sh*t reminded me of when the Going Mary was sunk by the Straw Hat crew. It’s just too much, damn it.