Leap geeked out when Kamui Woods appear in this episode, and I still insist Bakugo will turn evil. All for One also flashes his huge shlong, so this episode is awesome.

we realized we eat up a lot of time discussing BHA, since I like to go off tangeant and Leap keeps baiting us about future events since he reads the manga.

TPAB: heroes fight back. That’s all I remember

Keiko: Well that was a huge chunk of this episode… almost all of it really.

Leap250: there’s a post credits, in case you didn’t see

Keiko: Yeah there was… All For One made his appearance finally as well 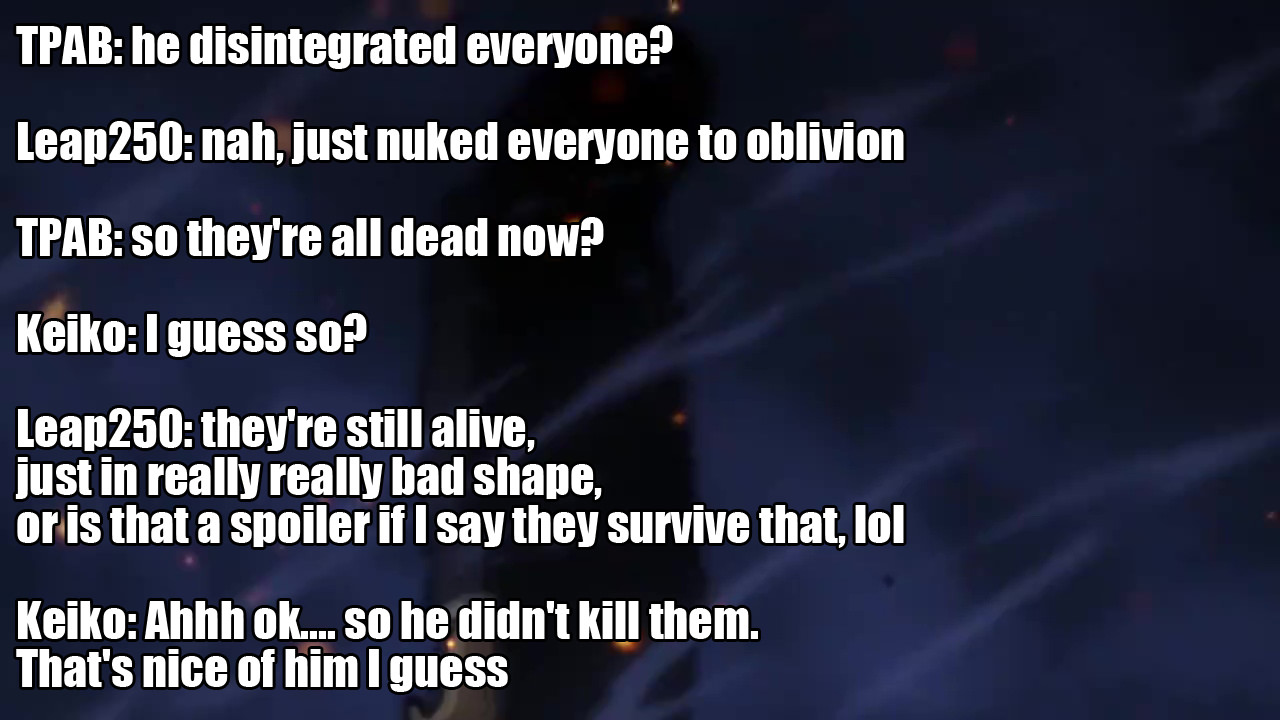 TPAB: so one for all is just a super all for one power? or something?

Keiko: Nah lol that’s not really a spoiler. He’s the opposite of all for one 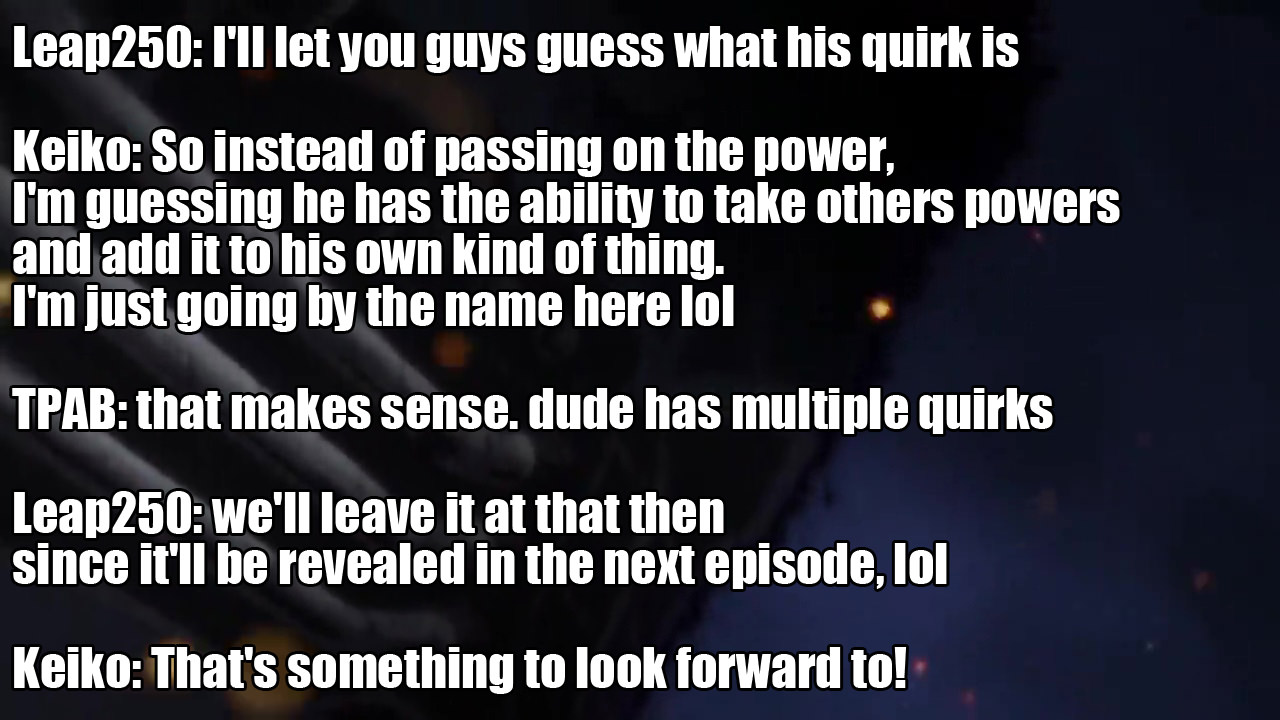 Leap250: but, as something to chew on in the meantime…which came first, I wonder…

Keiko: All For One I’m guessing. Just makes more sense for the villain to exist first… I dunno

TPAB: yeah, one for all is like something for an underdog david to beat an OP goliath

Leap250: absurd when you think that All Might is the David in this situation

TPAB: kinda frames how goliath the All for One user is though

Keiko: Well considering the display All For One put on…. I can see why All Might is in such a state after his previous fight against him. Midoriya having to go against him in the future feels like a really terrible joke at this point

Leap250: assuming All For One and One For All have been at it for some time now, then Midoriya can take his time probably xD

Keiko: Probably. He is still a student. Hopefully he can put it off until he becomes a full-fledged hero or something

Keiko: Yeah they made quite the blunder this time round 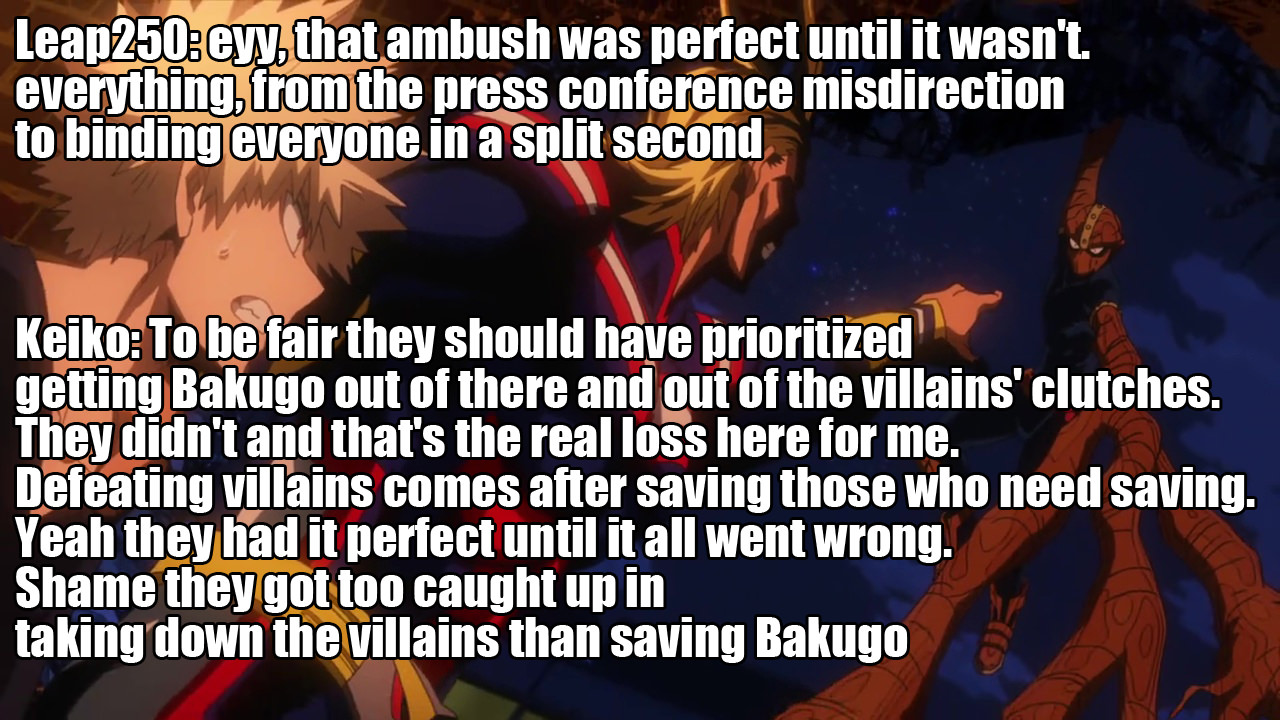 TPAB: is the liquid teleport thing a new character or did All for One did that??

Keiko: My guess is that was all for one…

Leap250: that’s all All For One right there

TPAB: so it is multiple quirks. The scene at the OP now makes sense

TPAB: the one where shiragaki walks and a bunch of people is desperately trapped behind him

Keiko: I don’t remember the OP all that well….

TPAB: i’ll get a screen grab

TPAB: oh wait, those are nomus, lol. my bad

Keiko: Ooo sounds promising. Does it have something to do with Shigaraki’s past? 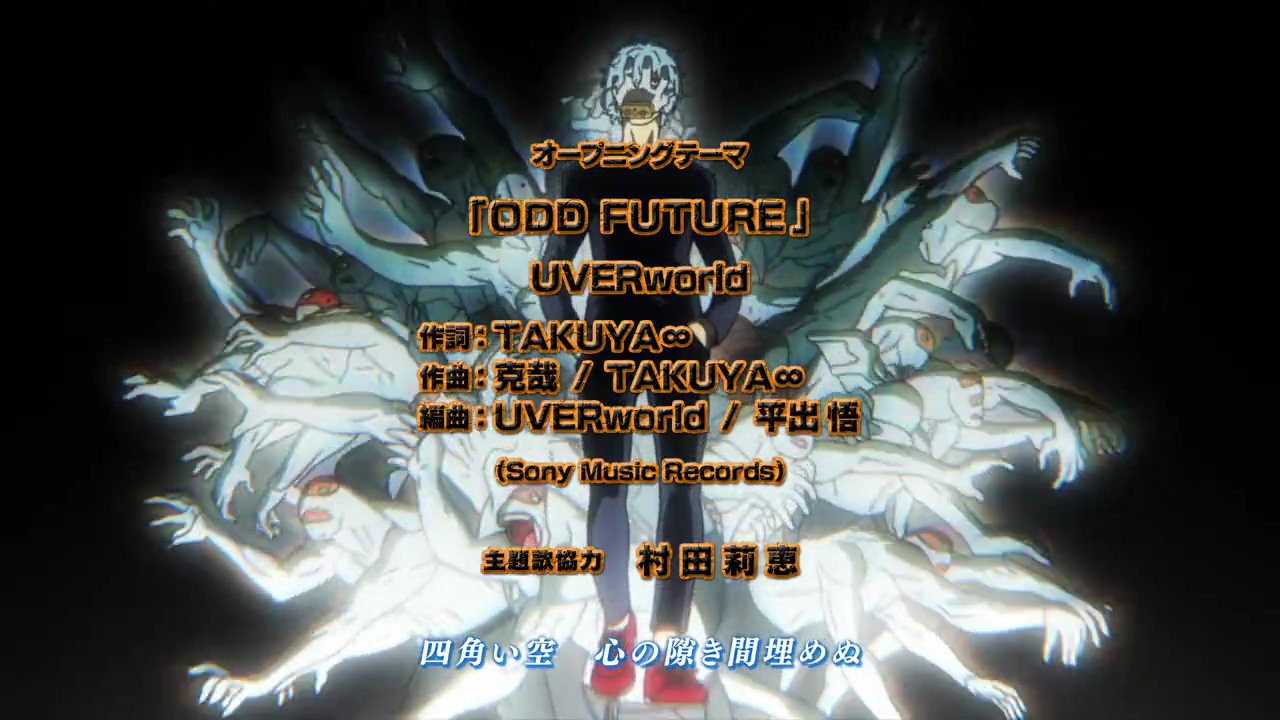 TPAB: it does transition to All for One obliterating an area though. Are the nomu and All for One not connected? 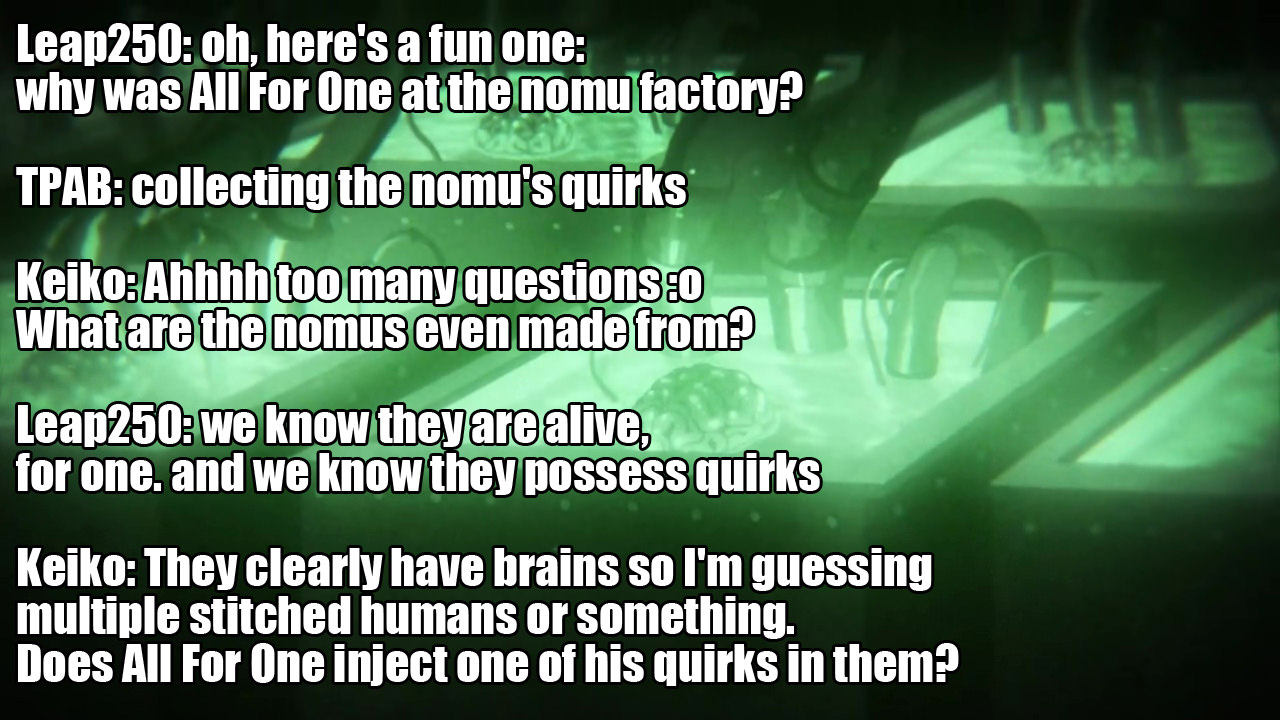 Leap250: the last hint for this is ragdoll’s current state. poor ragdoll 😦

TPAB: i think she was being turned into one

TPAB: but how and why was she the only one captured???

TPAB: the one she crossed with had chainsaws and drills inside its body

Leap250: she had the least combat ready quirk out of the pussycats

Keiko: That’s true. Plus she was probably caught off guard

Leap250: All For One also wanted her quirk

Keiko: It’s a pretty useful quirk to be fair

TPAB: aha! All for One is turning into such an evil quirk, i love it. what is her quirk??

TPAB: ah, she can scan a person, right?

Keiko: Hahaha all for one even sounds evil since it is super selfish lol

TPAB: the villains planned on kidnapping her from the get go??? 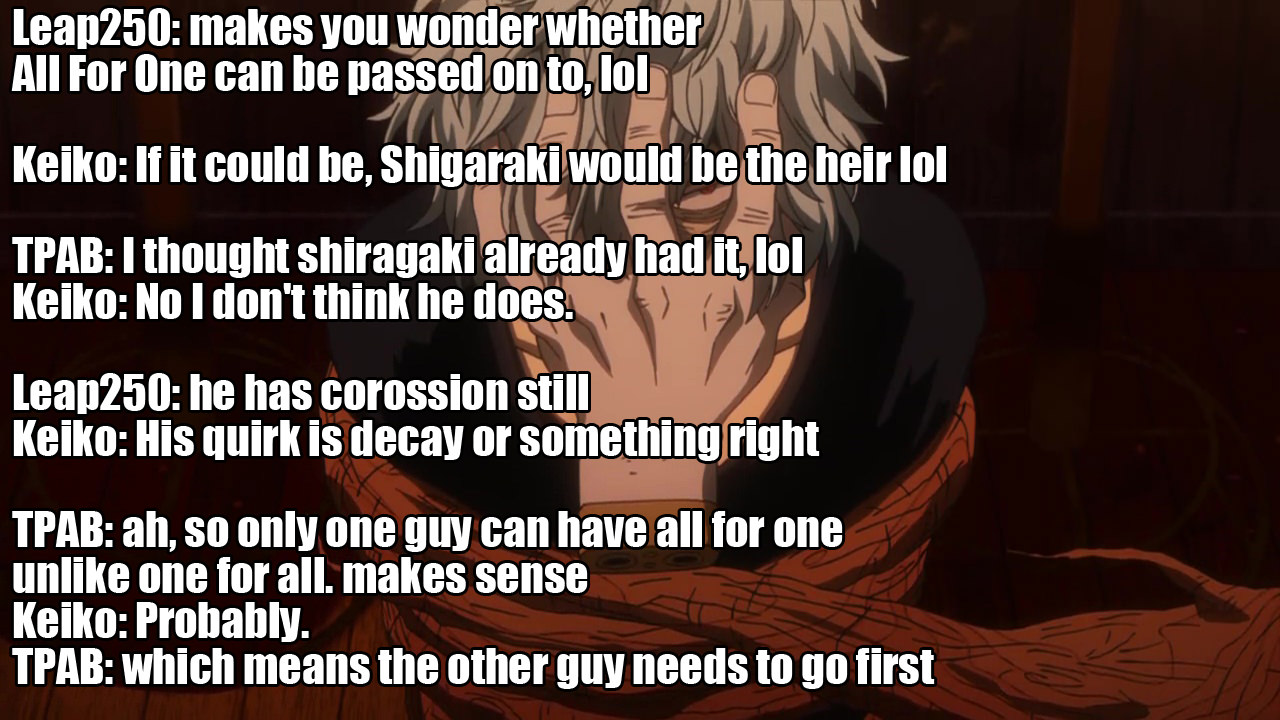 Leap250: if you’d remember, All Might supposedly caved his head in

Keiko: If it can be passed on. Something tells me it can’t unless it takes in One for all

TPAB: it means the guy’s days are already numbered, but I can’t see him dying so early, then again, i didn’t expect the rescue to happen so fast

Keiko: That’s true. I feel like All Might’s gonna be facing All For One sooner than we expect

Leap250: if only Eraser Head wasn’t at a friggin press conference

Keiko: So true! He has the perfect quirk for this situation

TPAB: he’ll be spammed with nomu before he can even get near him, i bet

Leap250: that’s what the other heroes are for. lol @ american ninja

TPAB: that was their plan to begin with, and even Endeavor was taken care of,lol

Keiko: That’s true…. they were swarmed with nomus

TPAB: no one saw it coming, it was glorious. this arc can’t end without toga showing off her powers, damn it

Keiko: True true! All Might’s scream said it all really

Keiko: We’ll just have to sit tight before we see more of Toga I guess

Leap250: I wanna say two arcs from now, but it depends

TPAB: arcs happen fast though, so its good

Keiko: Yeah… arcs in this show are real quick! Might get to see Toga soon then 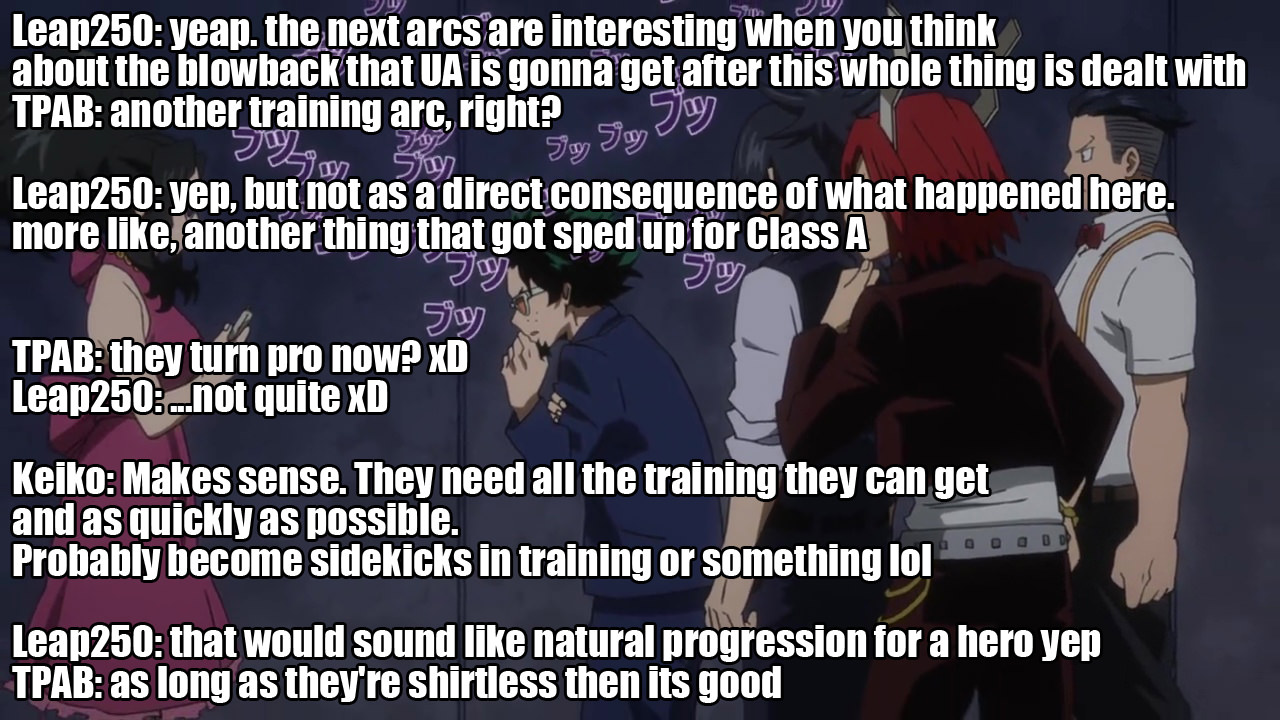 Keiko: Hahaha I just wanna see them get in some good action lol

Leap250: the rest of this current arc for starters. how do you guys think things will go down from here?

Keiko: From the looks of it, all the villains and Bakugo are gonna end up in the factory. Sooo Midoriya & co will somehow need to successfully rescue him….Will at least a few of the heroes come on scene?

Leap250: the factory is far, but it’s not that far from the bar yep

Keiko: Ohh ok yeah then a couple of the heroes might come over. It’ll be interesting to see how they save Bakugo from this

Leap250: interesting… how do you see All Might losing here?

TPAB: i dunno, just something that’ll betray Bakugo’s trust or something

TPAB: plus, the public outcry of Bakugo turning will be interesting

Keiko: Currently he has lost right? Since he couldn’t save Bakugo when he had the chance

TPAB: yeah, a moral or a cerebral loss since shiragaki plays like that

Leap250: he’s still within reach though, albeit barely 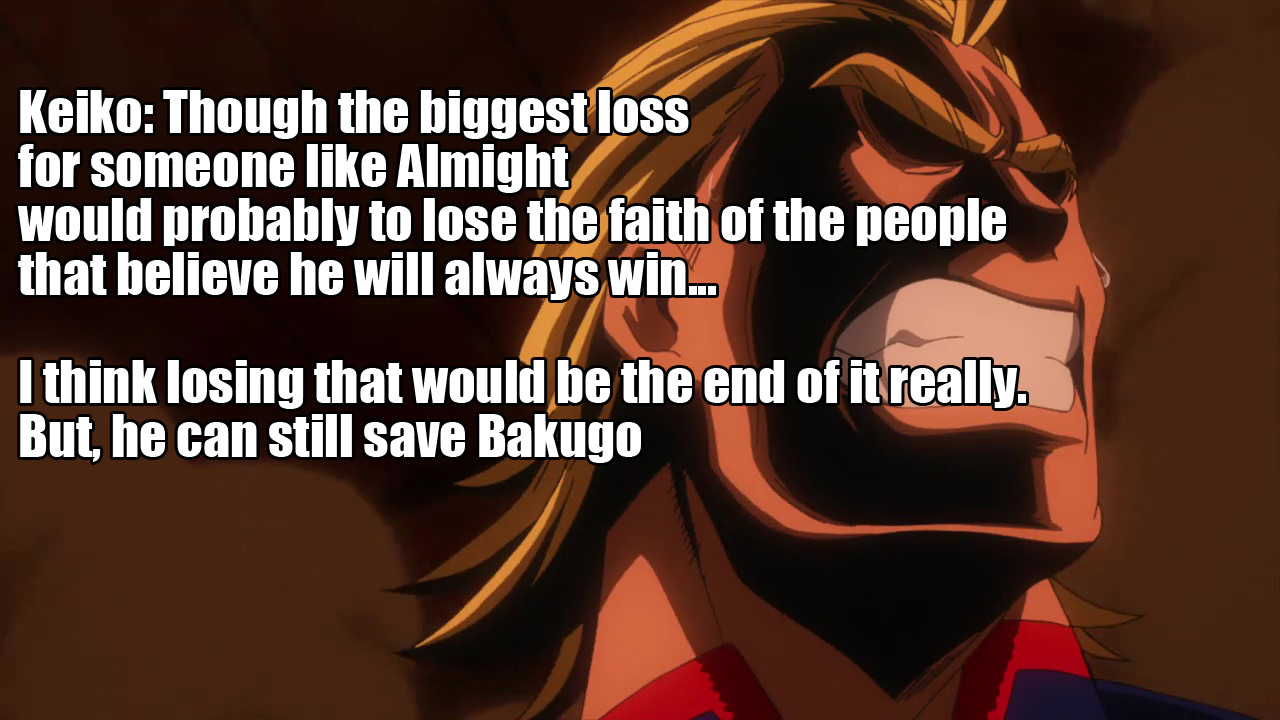 Leap250: ‘faith of the people’ is a good way of putting it

TPAB: plus, it feels like UA doesn’t deserve a win yet, not until the villains gets more points at least. but again, i love the fact that I can’t predict sh*t in this show

Keiko: That’s true… it feels like the villains will slowly chip away at them before a turn around is possible. Hahah true… this show is quite unpredictable is some aspects

TPAB: what do you think will happen to the rescue team who is in the midst of All for One?

Leap250: I hope they don’t move from their spot for one

TPAB: i feel like Deku must meet All for One though, and the guy should meet Almight’s successor

Leap250: meh, Deku is Shigaraki’s fight I’d imagine. else why have him there, lol

Keiko: Yeah… before anyone Midoriya has to face Shigaraki. That’s what it’s set up to be as well

TPAB: Shiragaki is like a puppy of the guy, so if the guy gets impressed by Deku, I feel like it just needs to happen xD 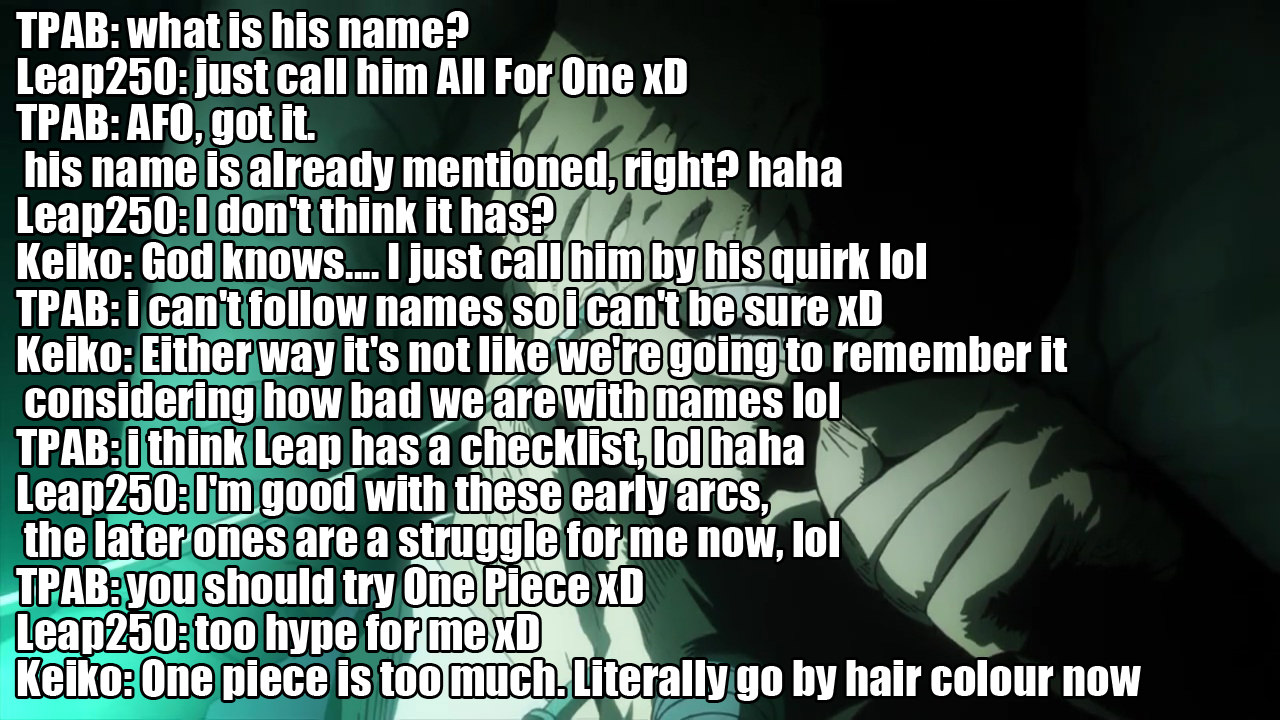 TPAB: BHA can blow up like that, i hope. if it runs long

TPAB: so, anything else?

Leap250: I think we got everything

Keiko: Yeah I think we’ve covered it all

TPAB: awesome. a 6 for me. the arc went by fast