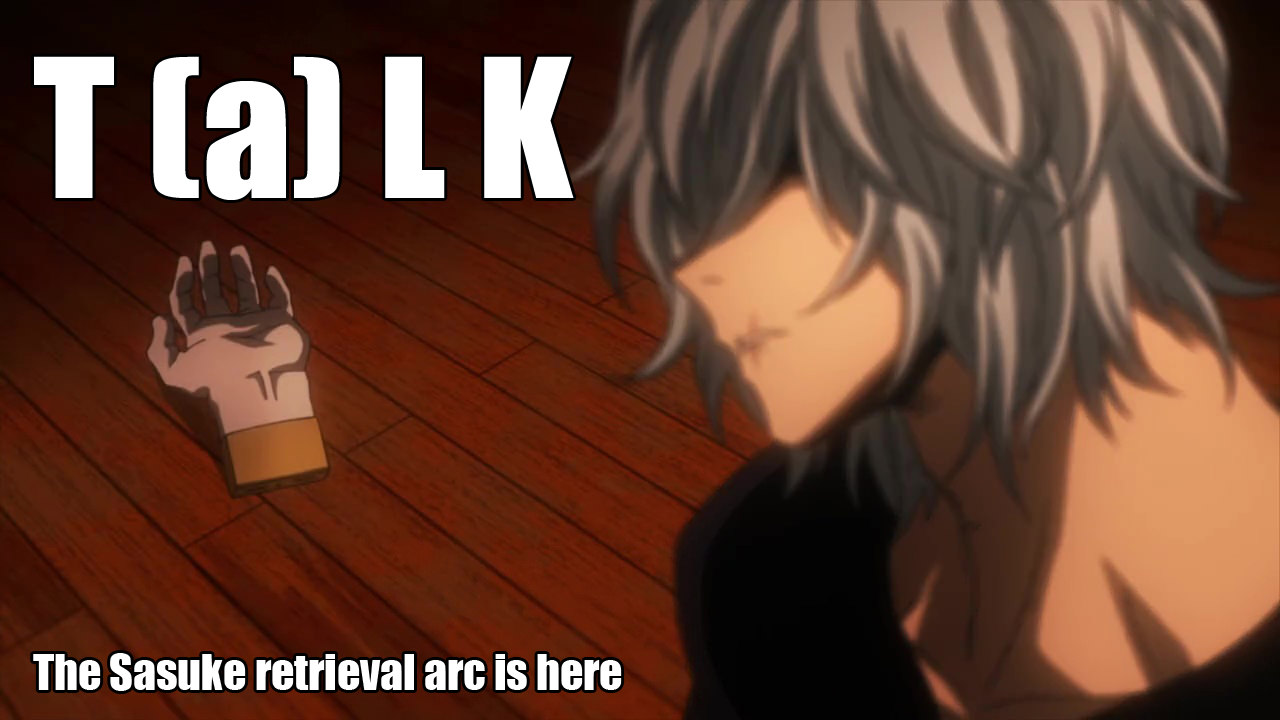 Life got weird, so the T(a)LK for BokuAca was a bit delayed. I’ll push them out now, and I promise *snickers* that I’ll be updated from here on out. We are constantly crushed by the time zone problem though, because we can’t find a good schedule to do the discussion as the episodes come out. We will try to push them out before the next episode comes out though. Oh, what’s that? Site and Devil’s Line ends next week? Well, this was certainly a good disaster of a collab. I can’t wait to do it again.

Yeah, we saved the best for last for this week.

Leap250: it’s gonna be way more compressed, but yeah, that’s essentially what it is 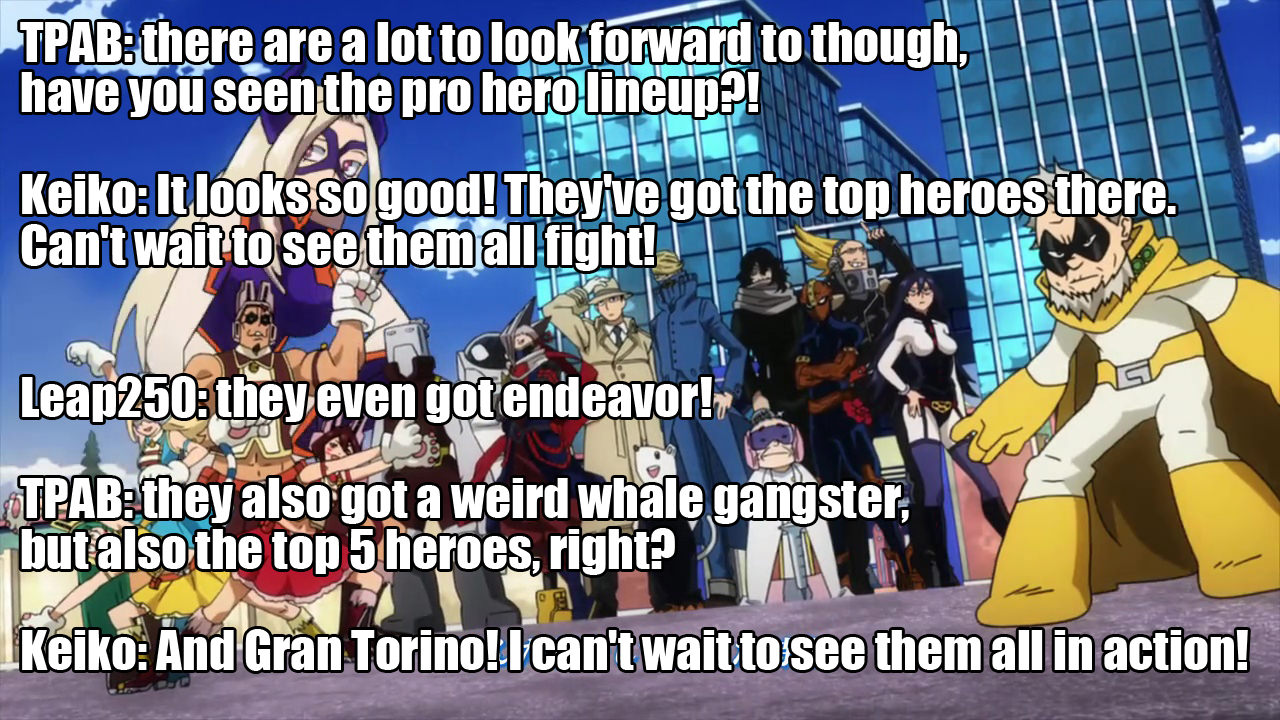 TPAB: the rescue team feels “meh” to me though. I wanted new heroes, but the guys who fought stain are still helping.

Keiko: Yeah he looks pretty cool. I’ll give him that. He got some cool moves as well I’m guessing? 😮

Leap250: he has supersonic waves and stuff, lol. other than that he does regular strong person stuff

Keiko: I’m looking forward to the supersonic waves 😮 Wanna see how that works! 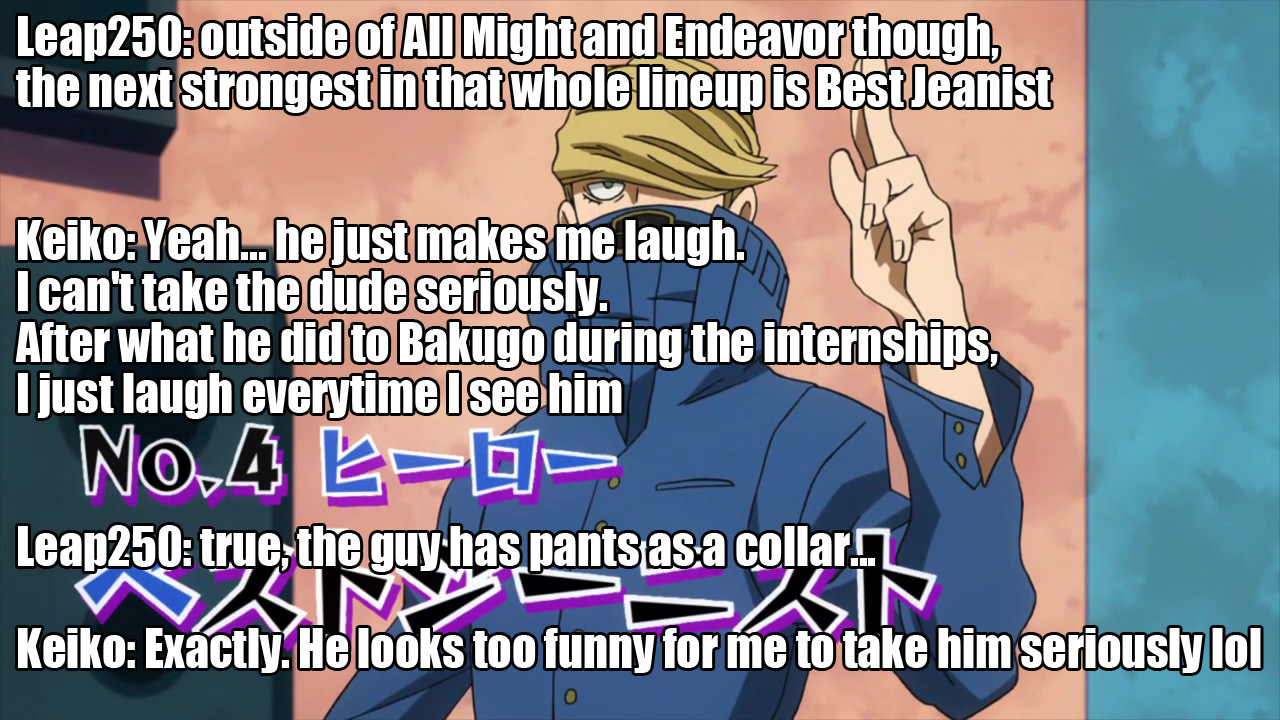 TPAB: what is his power??

Leap250: he can manipulate thread, make them thin and strong to bind almost anything

Keiko: Makes sense why he’s called Best Jeanist and is wrapped in cloth

Leap250: as for the rescue lineup, well, at least yaomomo’s there

Keiko: True…The line-up isn’t looking the best though unless something new happens with this group

TPAB: it feels like the major baddies will face off with the rescue team, but next ep they did say the device led to a nomu factory

Leap250: that was such an unneeded spoiler by the previews, lol, but I guess that’s better than what else they can reveal. and yeah, my hint as to the effectiveness of the rescue team would’ve been, ‘they won’t fight’, lol

Keiko: Lol yeah they made that loud and clear. They plan on not fighting. Good for Midoriya since his arms are beyond busted.

TPAB: yeah, but it feels like they will fight, since the show is explicitly telling us they won’t. at least they’ll meet toga and the gang, i feel

Keiko: Yeah I felt like they were setting them up to fight but at the same time I don’t want them to fight. Probably. I doubt they can avoid some sort of confrontation.

Leap250: other than Iida and Kirishima most of them are wearing it damage-wise. it’s gonna be a rough go if they do decide to throw down.

TPAB: which kinda feels like they will throw down, given their disadvantage, lol 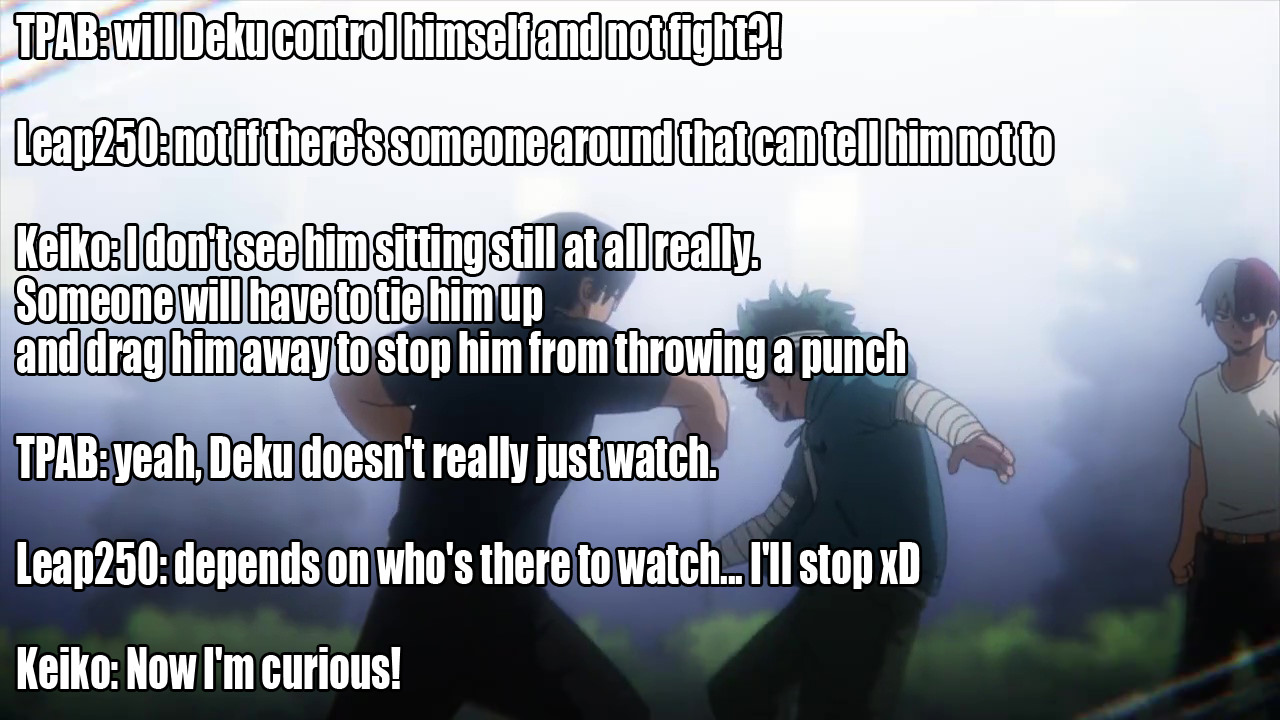 TPAB: you mean almight will be there

Keiko: Won’t he be out front fighting? Unless they actually meet, which I’m sure the kids will try and avoid, I don’t think it’ll be All Might stopping Midoriya. That’s way too expected

Leap250: what do you guys think of nomus apparently being made in a factory?

TPAB: given their wide eyed reaction, i guess they found out how nomu’s are made, lol. like in detail or something

Keiko: Where else would they be made? I thought they’d be made in some sort of factory lol

TPAB: but the pro heroes are also going to be there, right?

Leap250: ah, well, another one of those yes and nos

TPAB: the receiver will be broken while the team escapes, so the pro heroes are left to deal with the mess xD

Leap250: I’ll say here that the nomu factory is a ways from the hideout, lol

Keiko: So we’re in for quite the fights… how will they get from one place to the other in time then?

TPAB: bakugo could escape, but I doubt it

Keiko: If he escaped all by himself, that would be something. But yeah doubt that happening

Leap250: they got time, some fights will happen before they get there. well, “fights”

TPAB: ah, wait, almight knew where the bar is, so I guess the pro hero and the rescue team will eventually meet

TPAB: i just hope the fights are more satisfying this time

Leap250: I can guarantee you at least one of the fights to come out of this is an absolute banger

Keiko: Hopefully we get some good fights with the line-up there is. Ooo well I’ll look forward to that! Hopefully it won’t disappoint.

Leap250: with a lot of eyes watching this time. 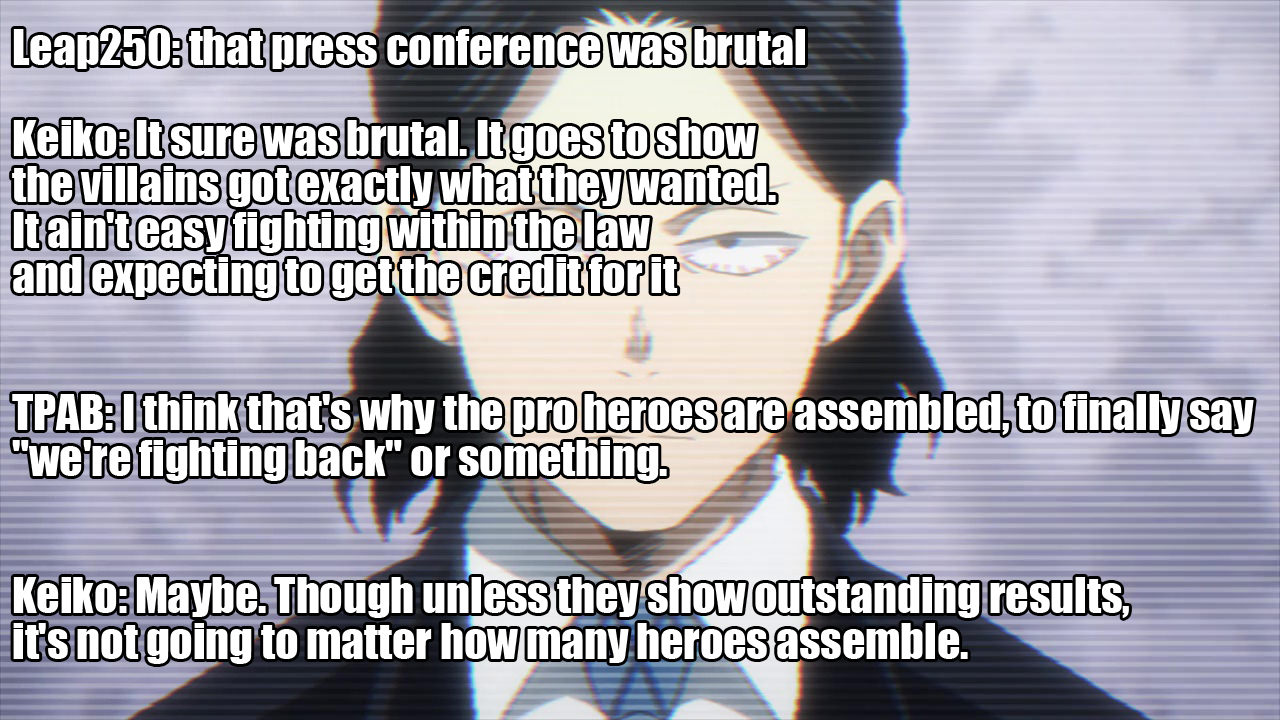 TPAB: why else would they assemble an A team? but yeah, public opinion is brutal

Leap250: to make an impression really, I mean, you’d think All Might is already enough. even in his current state, lol

TPAB: yeah, it’s going to be awesome for sure

Keiko: True… just goes to show how much is riding on this operation

TPAB: we also got a scene of hands guy persuading Bakugo. he didn’t budge, but i have a feeling he might, ever so slightly

Keiko: Nope Bakugo isn’t budging. He wants to beat All Might. No way is he becoming a villain 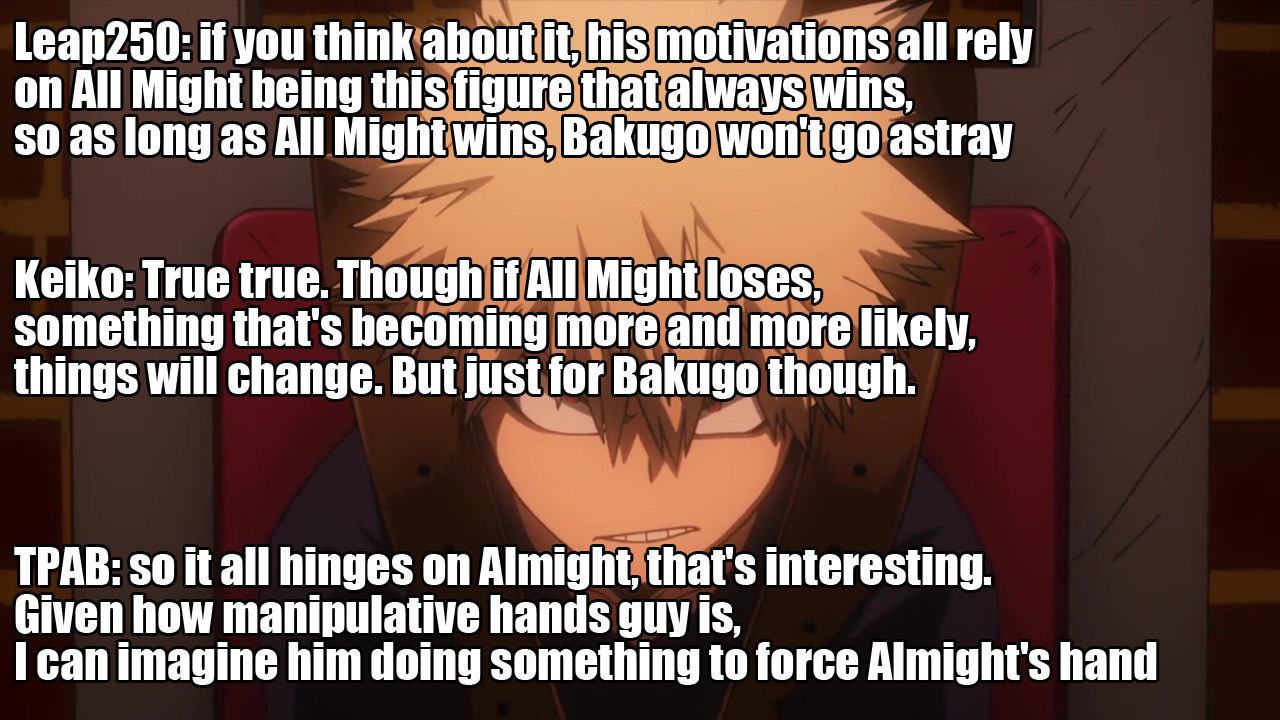 Leap250: or, whoever it is Shigaraki is answering to

Keiko: Yeah and wasn’t All Might planning to fight him anyways?

TPAB: a momentary loss for one for all, i could see that setting up the stage for a Bakugo heel turn 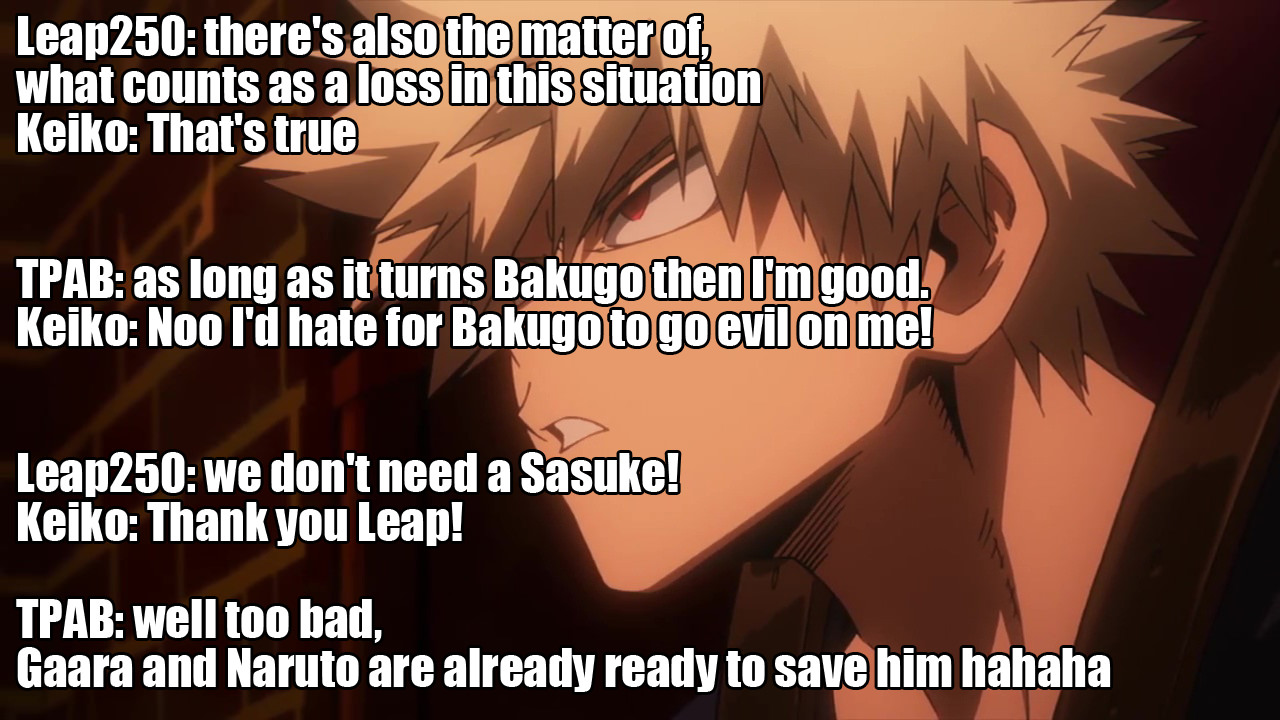 TPAB: oh, we also learned about Deku’s condition in this ep. he is completely destroyed, lol

Leap250: he has arthritis, basically xD

Keiko: Yeah completely and utterly. One wrong move and he can say good bye to those arms

TPAB: makes sense considering how much he pushes himself

Keiko: Yeah something like this was going to happen sooner or later

Leap250: makes you think how unnaturally durable All Might must be

Keiko: True say. It probably has something to do with how he buffs up when he goes All Might mode

TPAB: he did say Deku rushed his training, so Deku was never really ready for all of this, lol. The guy is just insanely heroic. But it finally caught up to him

Keiko: That’s true. Midoriya was never going to be ready. That much was foreshadowed when he got the powers. It was obvious something would happen. 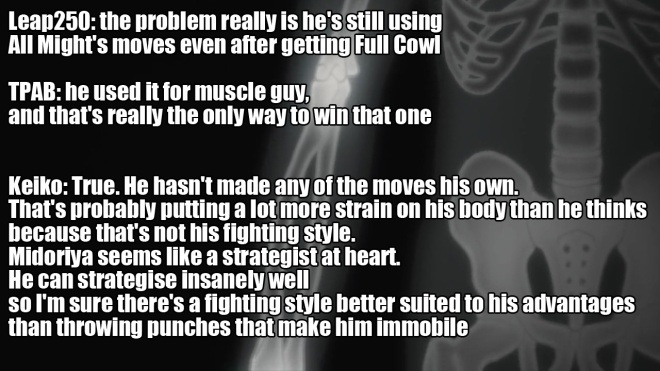 Leap250: fun fact, this is actually a future arc xD

Leap250: yeap. I did tell you last time that there was gonna be another one

Keiko: Well that will be something to see. It’ll be interesting to see what he decides to come up with

TPAB: as in another group trip or something similar with Gran Torino??

Leap250: nope, straight up training arc for everyone. Not just Deku I mean, but the whole class

Keiko: These guys are gonna need it! Good question

Keiko: Well we’ve got fighting then training to look forward to then! Sounds like a good season!

TPAB: oh, definitely! This season will be packed

Leap250: I wanna say it’s even the arc directly after this one

Leap250: I wanna see them fight again too :p

Keiko: Lol I wanna see them fight as well. But Bakugo turning evil, please no.

TPAB: we shall see, lol. so what else is there in this ep?

Keiko: I love how she just wanted to go into the store! She could have made the clothes but nope! Gotta do it the commoner way! That’s just cute 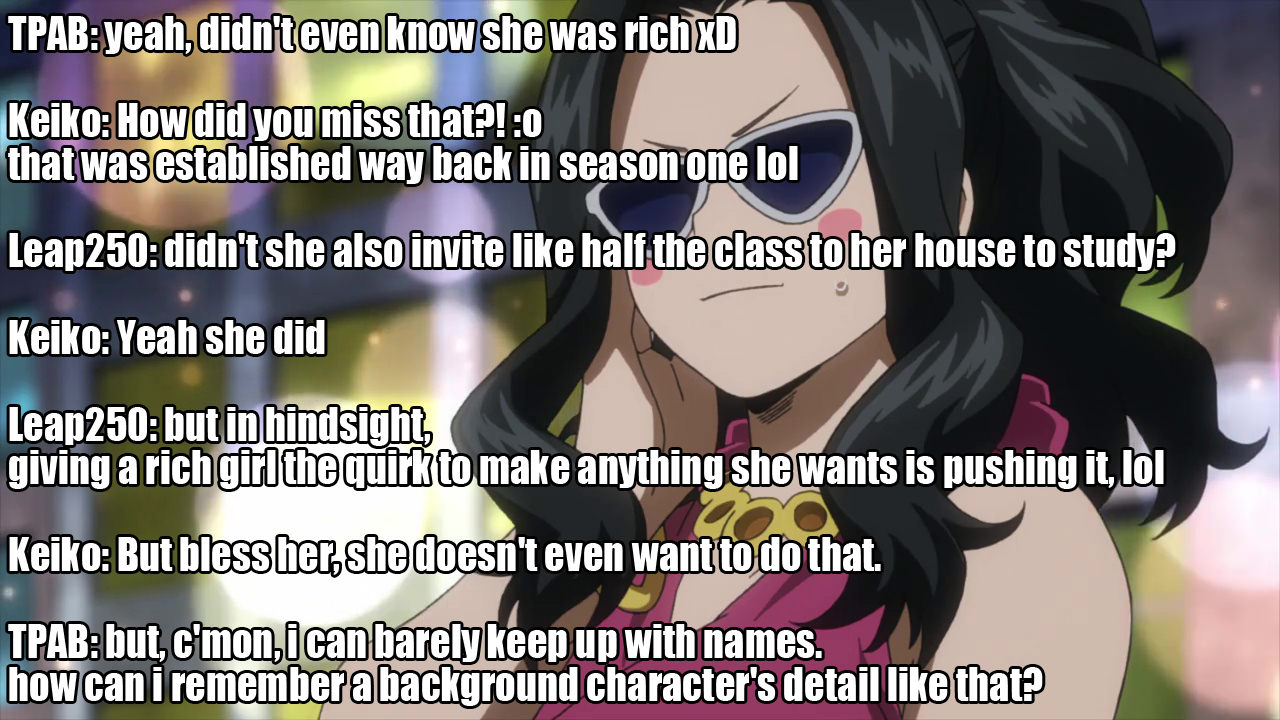 Leap250: she did say she puts the economic balance of Japan in consideration, hahaha

Keiko: Err because she’s the only one who has such a background? 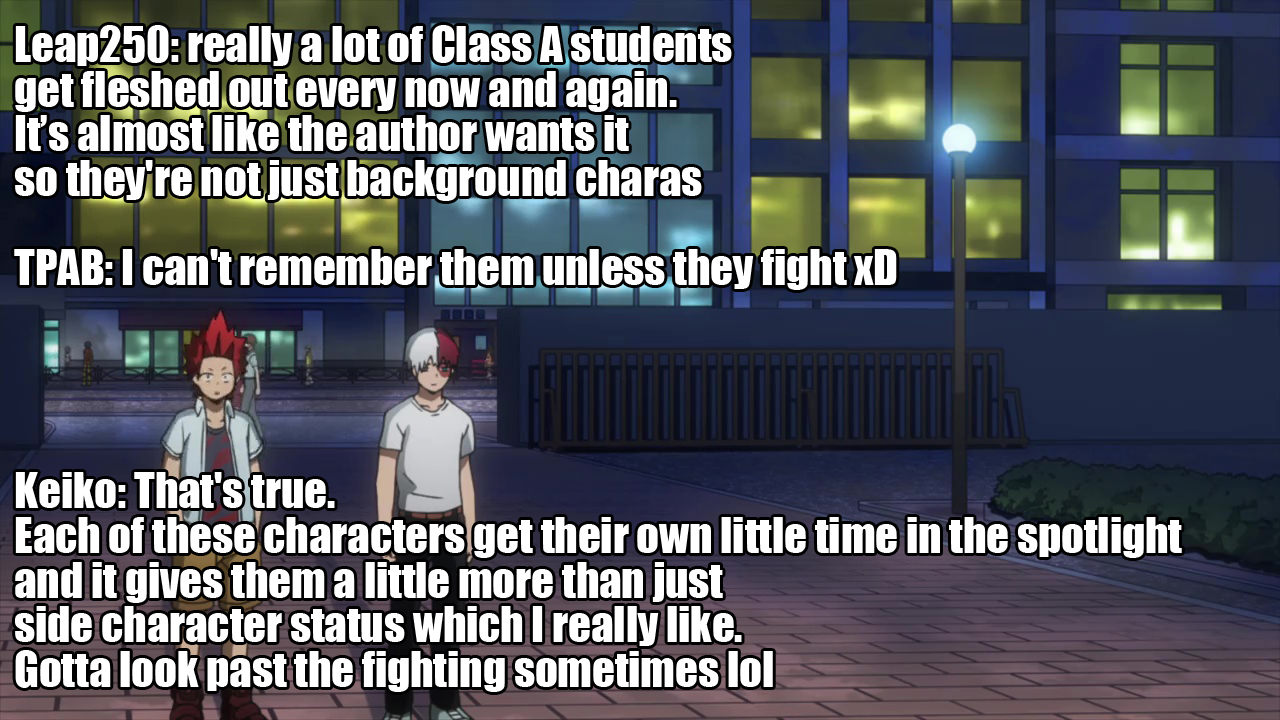 TPAB: i pay more attention when they fight. so, anyways, ratings?

Keiko: I’ll give it a 7 I guess. Yeah it felt really long lol

Keiko: Yeah lol I mean we almost spent 2 hours on it…

Leap250: that, or we just blaze through DL normally, lol

TPAB: atleast we’re done! til the next one!

One thought on “T(a)LK: Boku no Hero Academia S3 Episode 8”