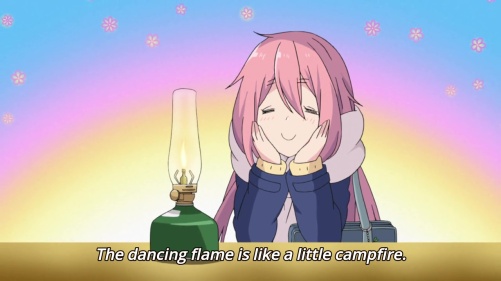 When I was a child, I used to slide down the handles of our ladder until I went over the rails and fell two stories to the ground. No, that didn’t happen. I lied……. let’s read on.

This might be the best episode of Grancrest so far, mainly because the pacing isn’t really that crippling. I feel like we’ve finally caught up to it, and we already know the scope of the anime itself. This episode, in particular, is just really fun to watch. It focuses on the love between Marinne and Alexis. I was actually surprised that they had an actual love story, because I thought the whole wedding was just a political union, like nothing involving romance. I was wrong, and thank gawd I didn’t have that in my predictions, because a big chunk of the episode follows Alexis’ journey into wooing Marinne. It’s a particularly cheesy episode, but I really like it. The pacing isn’t trying to choke you out, and it’s finally building on something familiar. It’s also surprising to see a tough girl like Marinne swoon to Alexis’ gentleness. I guess big boulders like being caressed by the wind sometimes. Alexis is old school and pretty gawd damn cheesy in his pursuit too. He sent her love letters, defended her from a man ready to sexually assault her, and he gave her a big gesture of his love. I’m not gonna lie, I like that gesture of his love. Arranging red stones to resemble a flower viewed only through a window by your lover is a sure enough way to get her panties to drop. I guess it’s all the more shocking that Marinne actually responded to Alexis’ gentleness. It was as if they were really meant for each other. 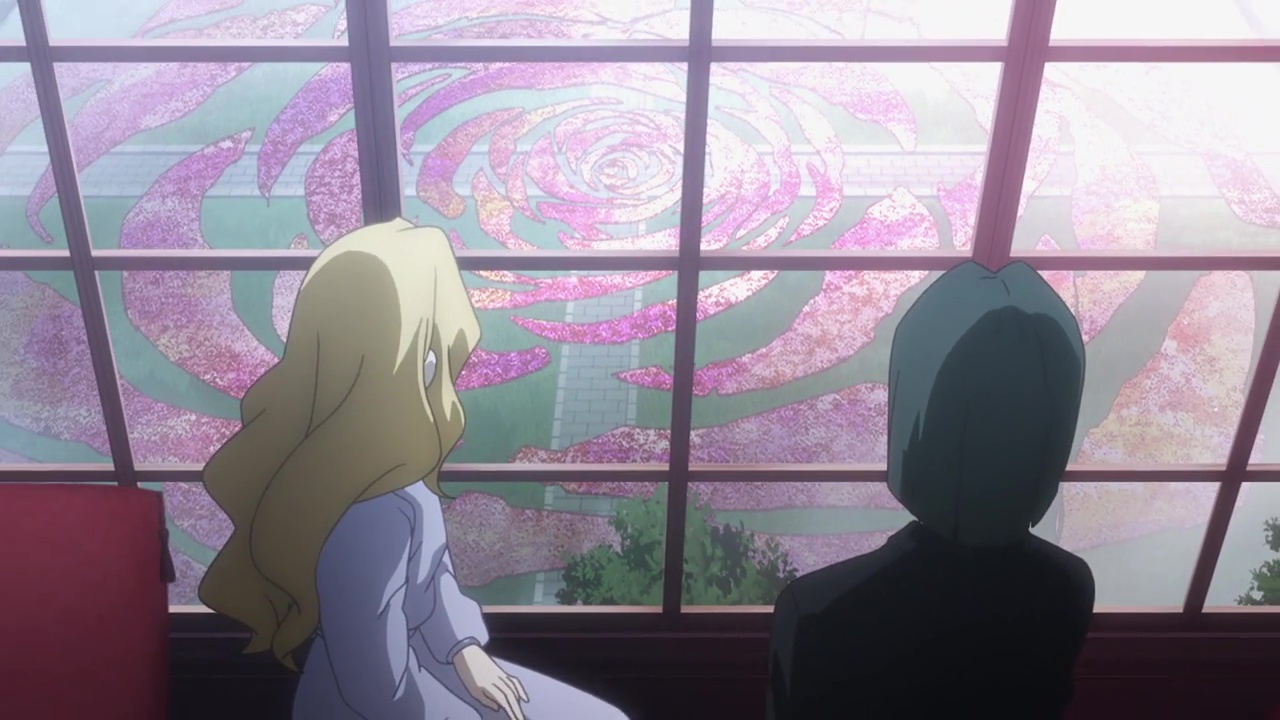 I’m not a fan of cheesy love stories though, and I was cringing at some of the dialogue during the love story flashback. I personally prefer some salt and vinegar with my love stories, but this one did work for me. Alexis’ idealism also won her over, and she really gave her entirety to him. It is amazing, and it’s all the more heartbreaking that these star crossed lovers are now on opposite ends of an impending war. But will there be war? Marinne wants one, because some of the lords doesn’t seem to want her as their leader. I really doubt that the Alliance and the Union really have any control over the region. It seems that lords can just switch side with no repercussion, and some can even survive without joining a side. I’m not exactly sure what benefits with being in the Alliance or Union, so I don’t think the lords really have any incentive to join. I mean, maybe these lords just haven’t felt the horrors of war yet or maybe this story needs a Luca Blight or a Joffrey Baratheon to really convince them to join sides. As of now, I don’t think there is really a reason to join the squabble between the two groups. I think this is intentional though. It is part of the story that leadership within the two groups are in shambles, and a character will rise to the occasion to unite the 108 stars of destiny to rule the continent. Suikoden is awesome, guys. 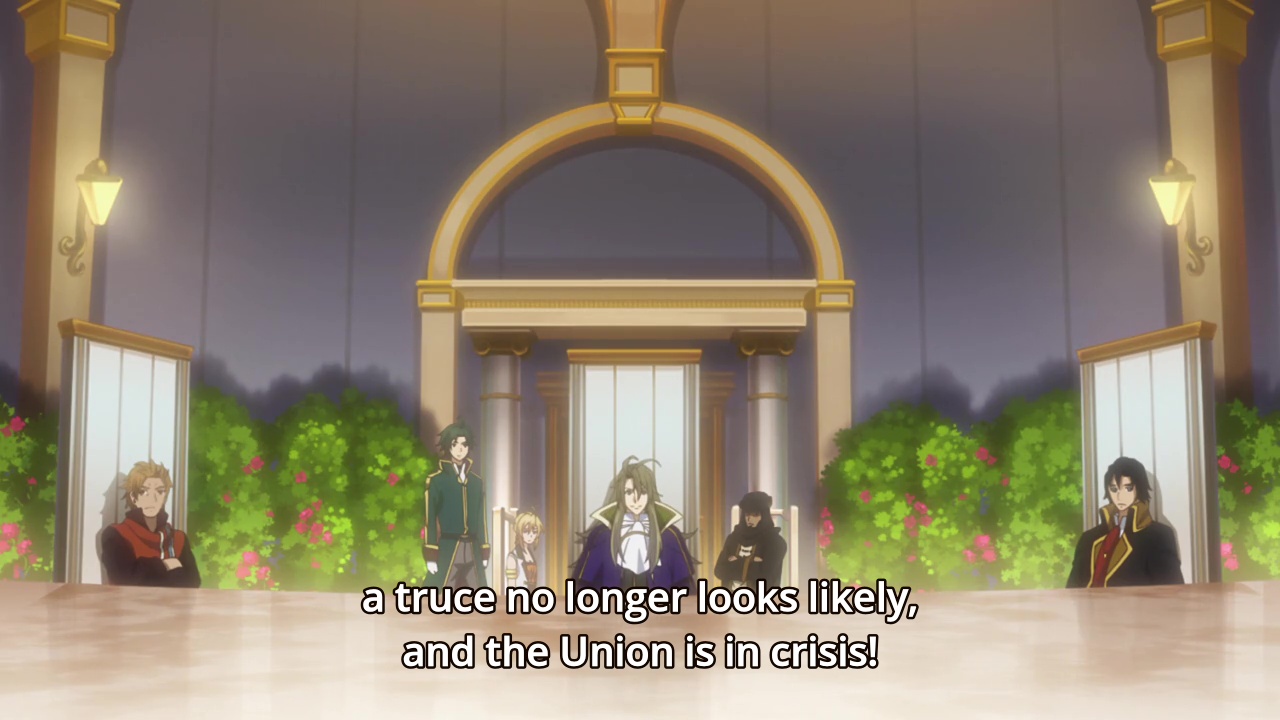 The other part of the episode focused on the lord meeting. First up, Poderico is banished from the Federation. We didn’t see him grovel or beg for forgiveness. He was just gone, and I bet he’ll come back soon enough. Secondly, Mr. Meme shouts a lot in the meeting and this helps me gain some points for the prediction game. Thirdly, it seems Villar wants to push for war but the other lords want peace. I distinctly remember that the status of the two groups is a “stalemate” but it seems the Federation is pushing for peace. Meanwhile, Marinne is getting desperate. The other lords are losing trust in her, and she decided to attack Alexis’ domain. Oh boy, I wonder what that entails. We’ll have to see in the next episode though. Like, I’m sure we’ll see her attack immediately, because this anime is impatient like that.

Notable Characters in this episode 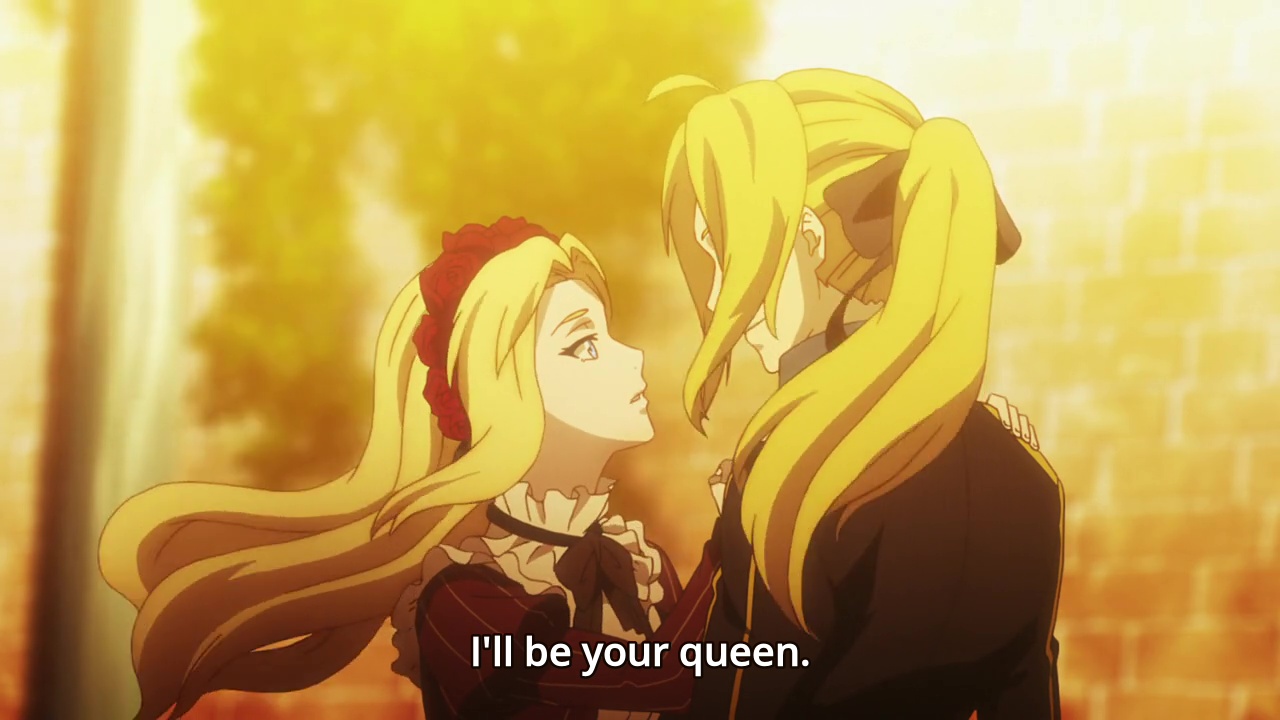 Alexis is still a standout. He bagged a girl from the enemy’s side. That’s like wooing a mormon to convert just to be with you. Alexis is an All-star, and I do think his death flag is setup. If these two have a romance like Romeo and Juliet then I’m sure it’d end in a tragedy too. I also cheered when he was punched in the face, and Marinne retaliated by kicking the other person in the crotch.

Villar is also a standout. He refused a chance to lead the Federation into war, because he believes the grandfather of whoever wouldn’t want to see his lineage fight each other. Villar doesn’t want to fight Marinne, who he shares common blood. I like that. He’s like a flawed person because of his devotion to his blood, which I’m sure will flow spectacularly out of his body soon enough. Ugh, why am I getting a weird feeling someone should die by now?

Plot Related: Alexis will die (I’m going for it. I’m sure this won’t happen, but I need to stick with my gut instincts and it’s telling me his death flag has been raised. I’d even add that a betrayal will lead to his death).

Character Related: Someone will lose a limb

This episode of Yuru Camp is another set up, while the next one will be the pay off. I had in my predictions that Rin will be interrupted while studying, and sure enough, she wasn’t featured in this episode. Instead, the rest of the girls are. Literally everyone else is featured except for Rin. What the hell is going on?! That’s it. I’m now convinced C-Station is reading my blog and messing up my predictions. If you are reading this, then I bet the next episode will have “pantless related” joke. Go on, I f*cking dare you!!!!!!! I’m losing points, damn it. Hahaha 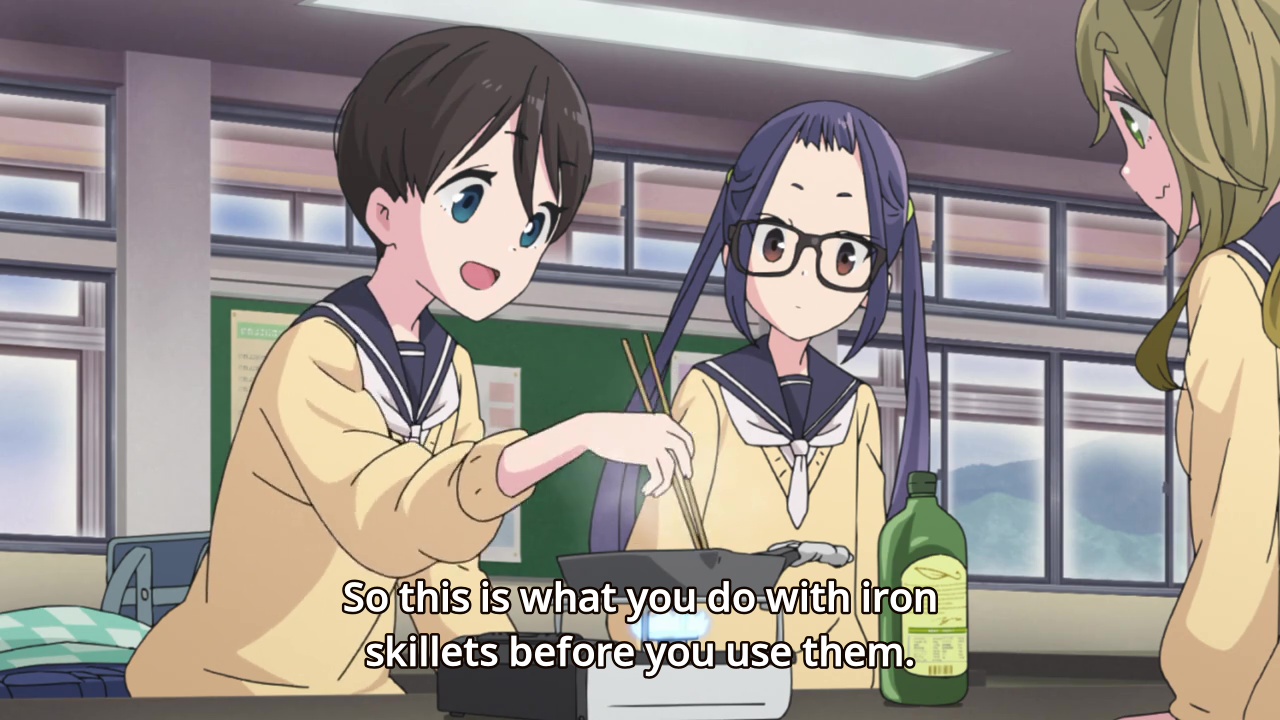 Anyways, this episode focuses on the Outdoors club, who are preparing for a Christmas camping (daytime). They even invited the girl with the dog, I forgot her name, and she agreed to join. Yes, the cast is going to assemble in the next episode. I believe all of us have a prediction like that, unless Rin isn’t invited. I’m sure it’ll happen next week though. But for this week, we see the club wash a skillet and a wooden bowl. Riveting. 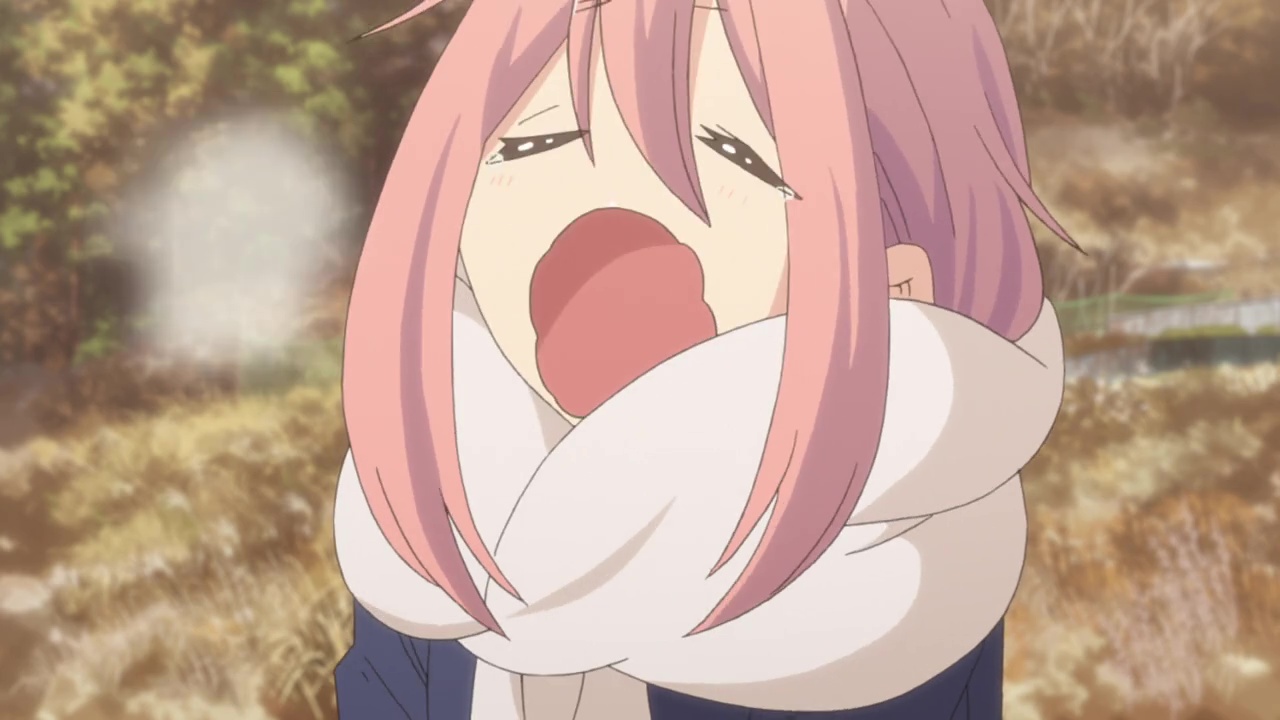 It’s a pretty barren episode. It was nice seeing the other characters get featured, but I’m a bit pissed that it had “exam“ in the title and we didn’t see an exam happen. We did see steam buns though, and Caribou is actually a store. I thought they were going to butcher an animal. I guess we’re not there yet, but I’m crossing my fingers that it happens. We see the usual routine of the girls. They window shop, buy an inexpensive stuff, eat some food, and chat with each other. It’s a fun episode, since the approach is refreshing, but it really just sets up the events for the next one. The whole routine is shaken up that even Rin does the omake segment of the episode. I’m actually looking forward to the next one, since I want Nadeshiko and the dog girl to interact. Nadeshiko plays well with everyone, and I bet we’ll get some refreshing stuff with that combination.

Notable moments in the episode 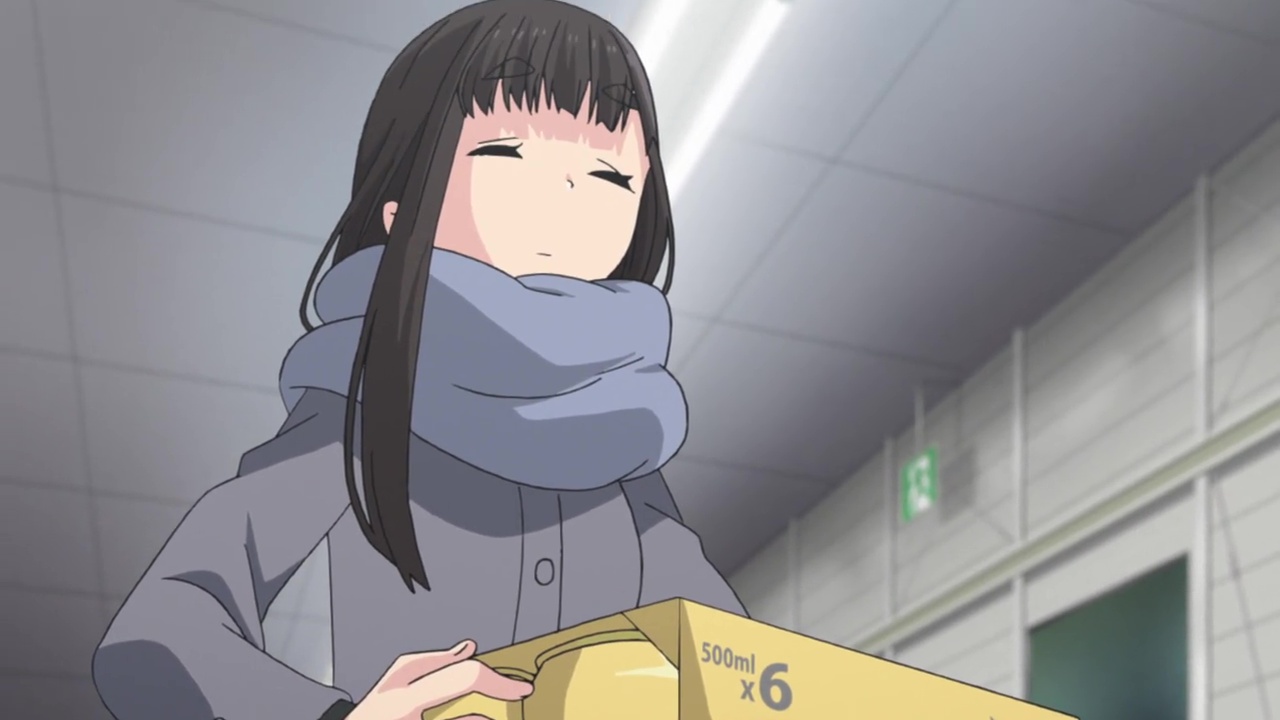 Plot Related: Characters will ride the bus to their camp ground

Oh gawd, ok, Sanrio Rangers. This anime is really going on a sharp decline, both in story and animation. I said that already though, so there’s really nothing new to talk about here. They brought up the whole “sparkling” thing though, and my mind, that is only paying 1/4th attention, keeps thinking that the guys want to dress in drag. These lines don’t help: 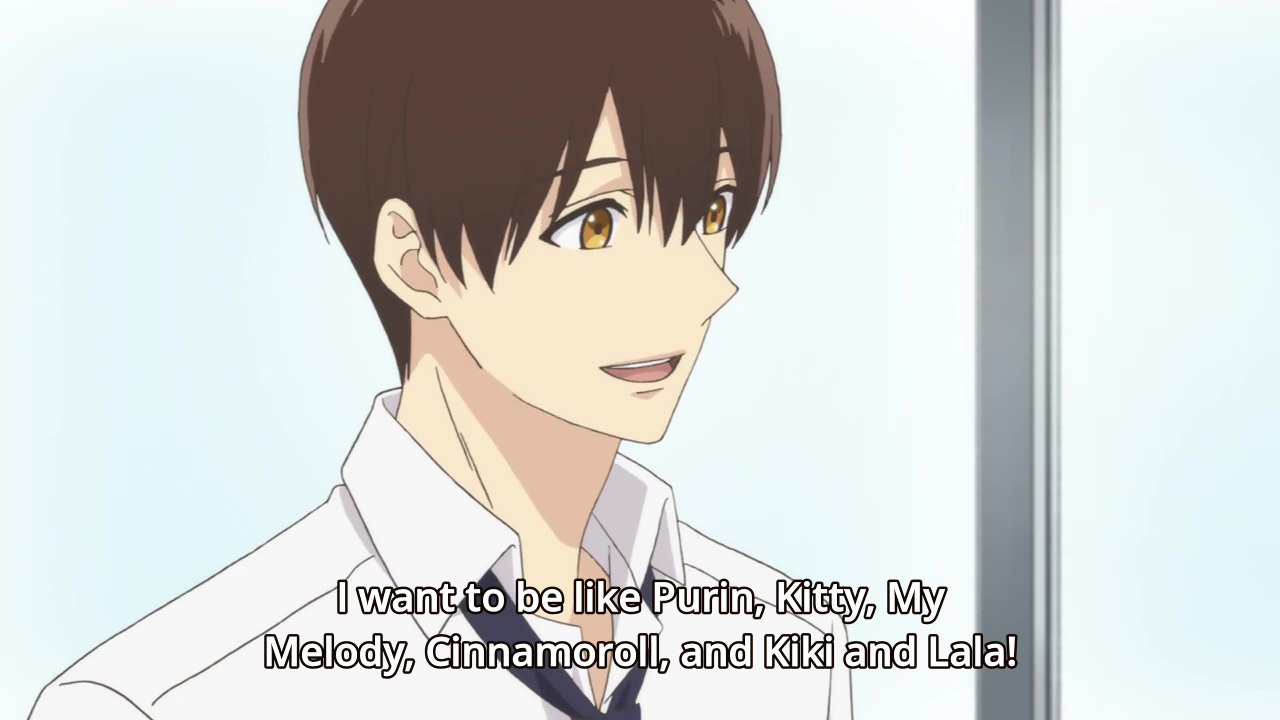 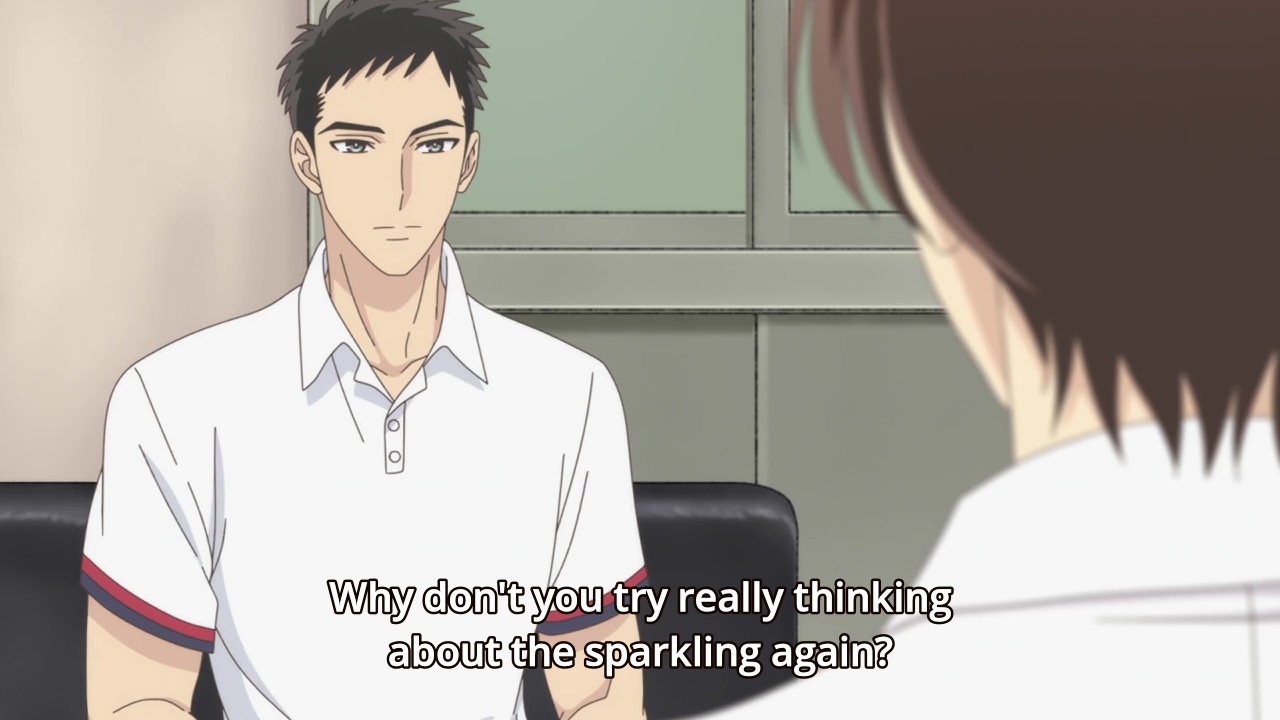 This is a pretty aimless episode, so you can tell the paycheck for the writer was really worth it. Kouta announced he wanted to do something, but he doesn’t know what. He wanted to sparkle so he attended the guys on their shtick, like the soccer club and Yuu cooking dinner, until he went down on his knees and we have an extended conversation with the crotches of the other guys. 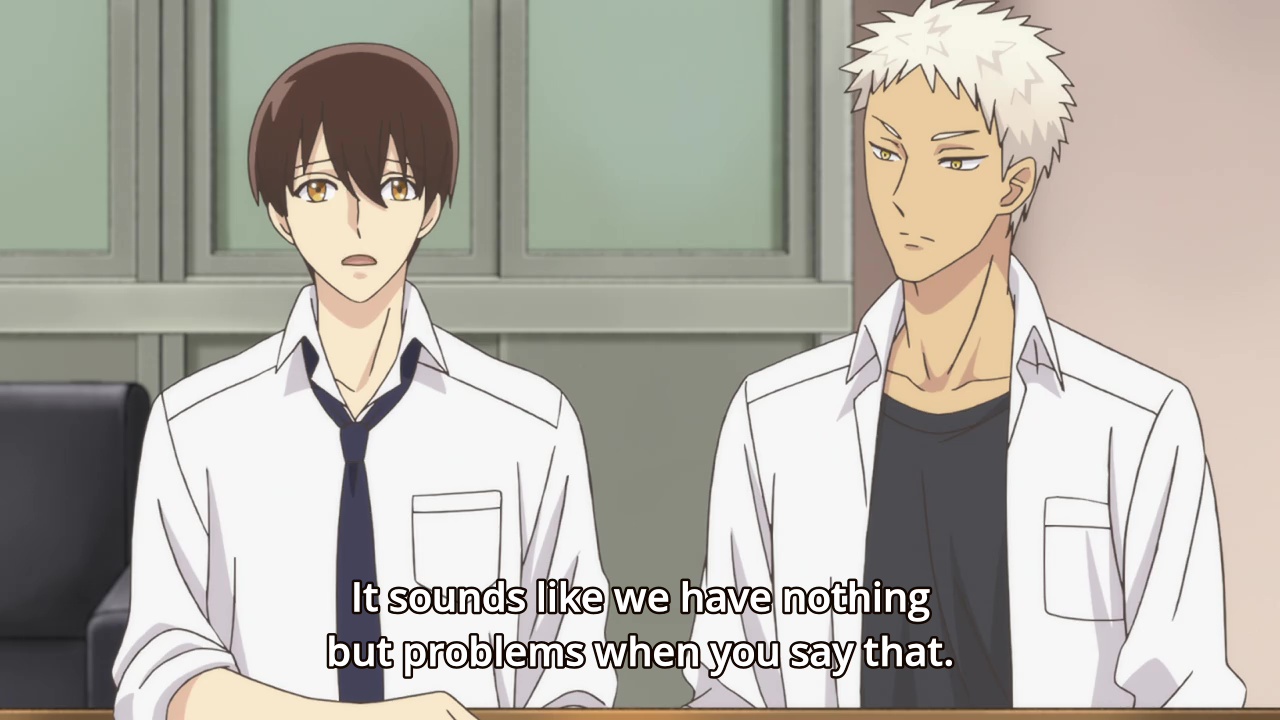 Then they all decided to do a play for the festival (why prolong it?!) and then they all took part time jobs. They then decided to do some “training”, whatever that means. And the next episode is a beach episode, so f*ck it all to hell. There’s nothing to talk about here, really, because the episode is just lazy. We got this though: 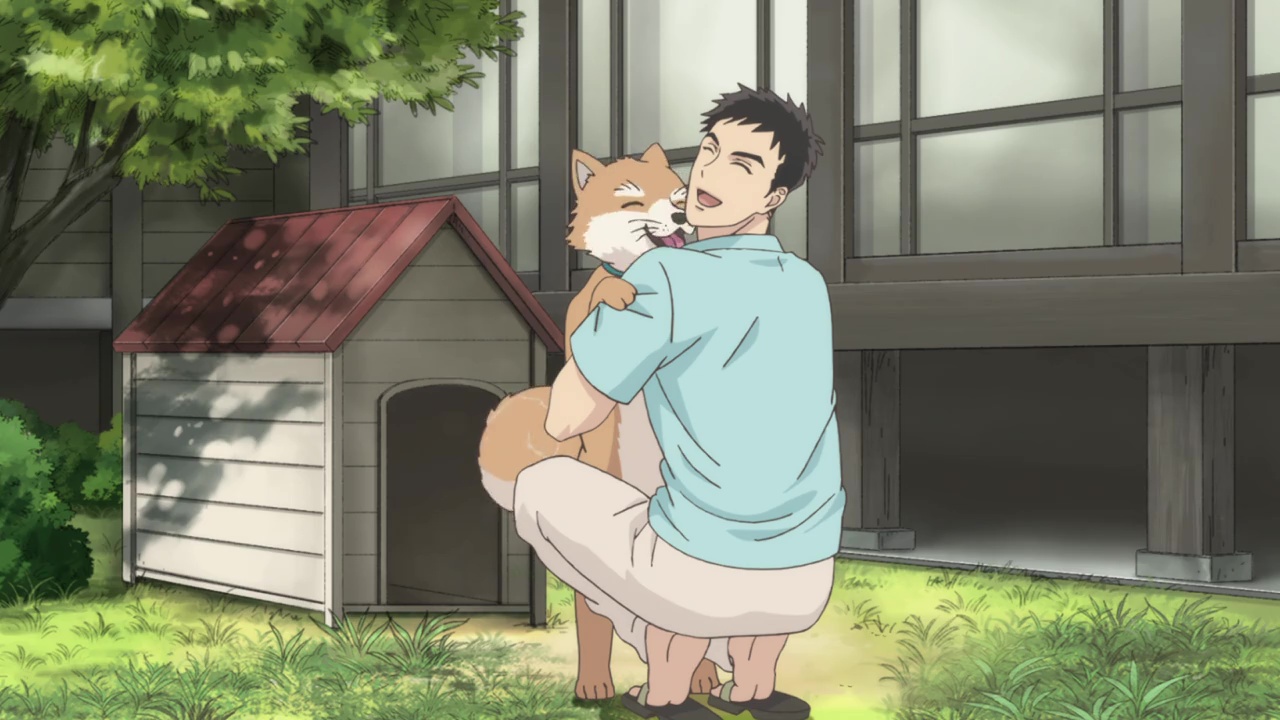 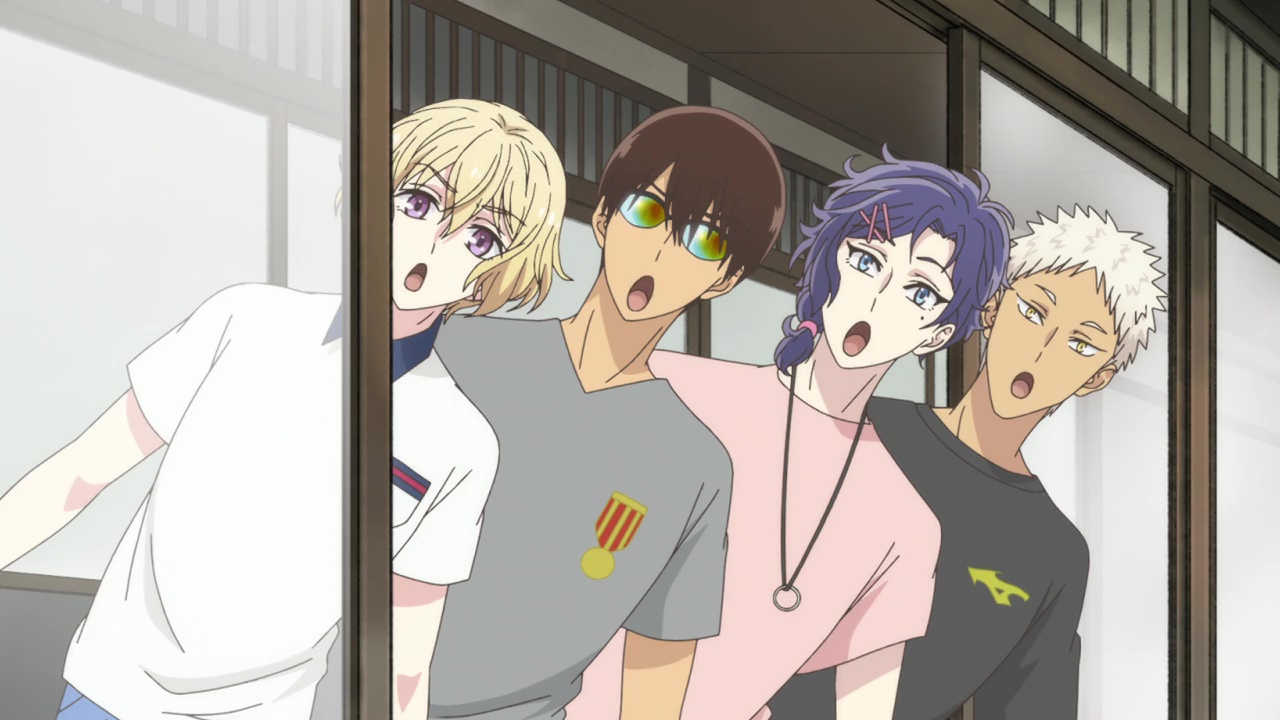 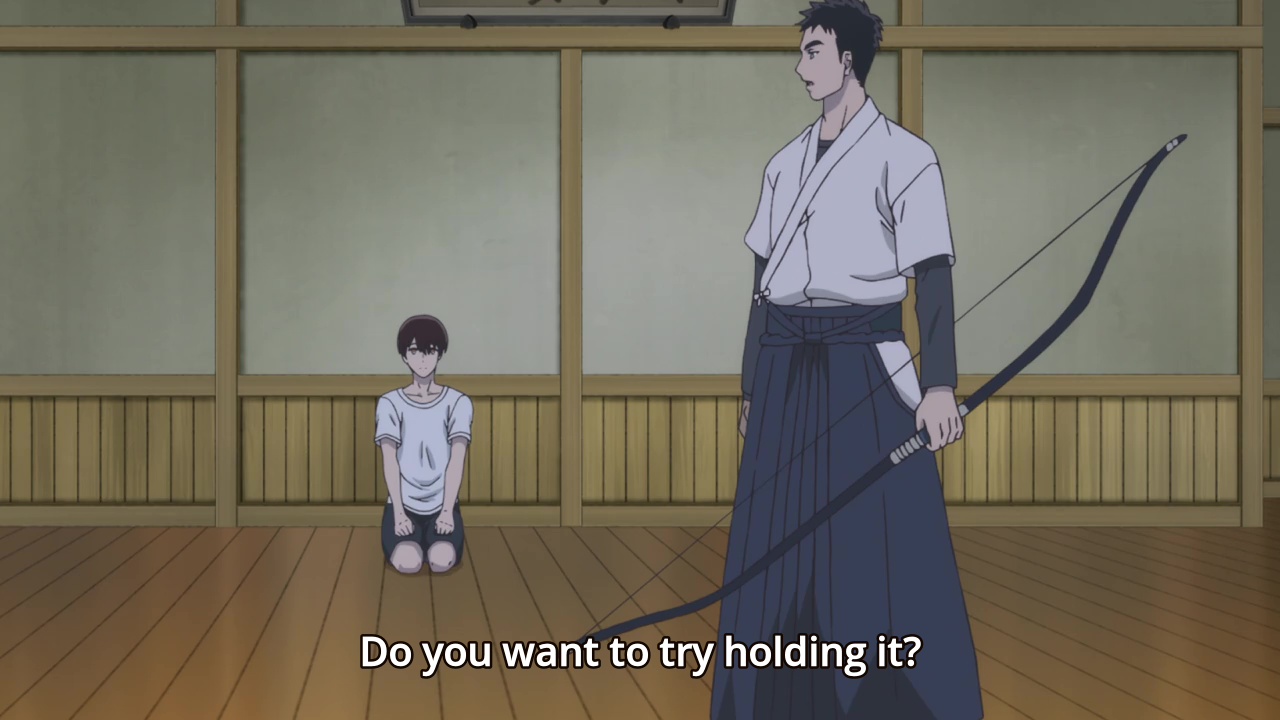 Yeah, the president seems to be the dirtiest character in this anime. But I think the final end goal is the festival play, so it doesn’t really matter how we go from there.

Character related: Someone will appear in a speedo

(possibly with some Hello Kitty print on it or whatever)

Check out the other participants’ posts. Irina is crushing us, and it hurts! But, anyways, check out her post HERE, HERE and HERE 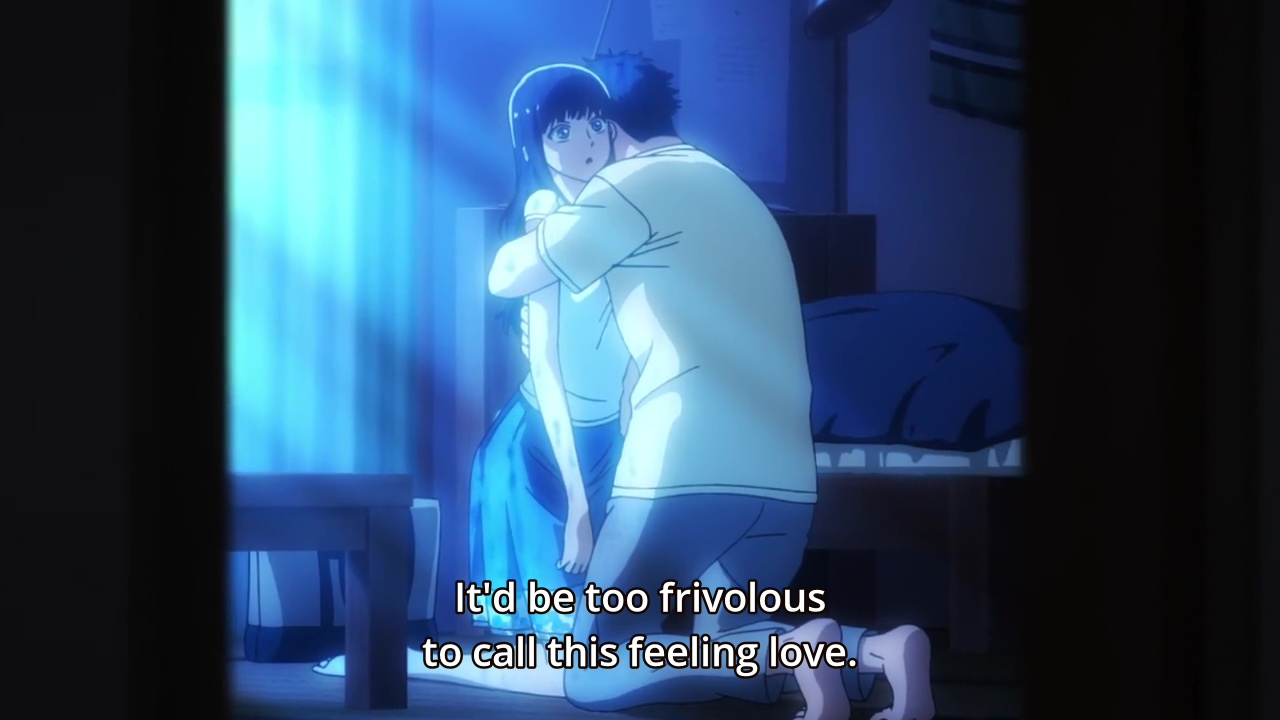 Meanwhile, on the other side of the bloggersphere, Keiko and I are having vastly different opinions on After the Rain. I love our discord, and I hope you guys enjoy it too! Check it out HERE