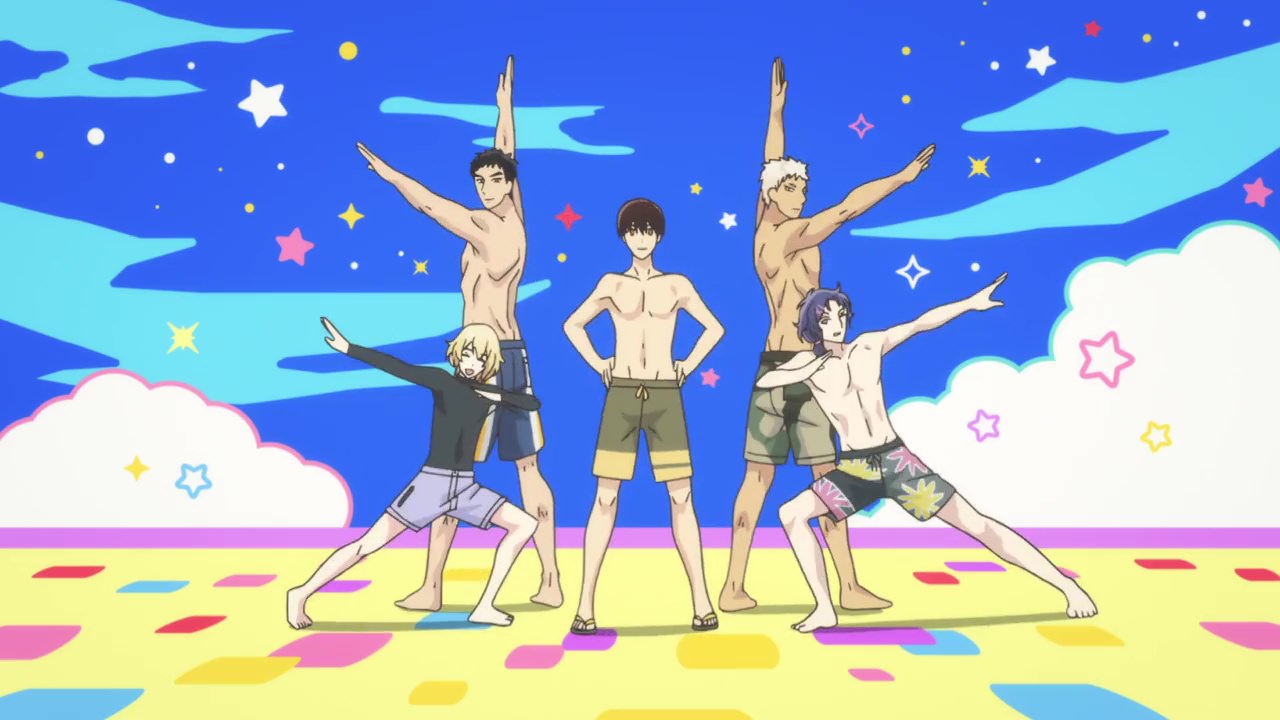 The third week of the collaboration project continues, and who is behind on the prediction game? A handsome pantless bastard, of course. Ugh, this will be rough, guys.

Once again, this anime is moving at a fast pace. In a huge exposition dump, Theo reveals that he doesn’t want to rule the region. Instead, he wants his home island free from its lord. He plans to charge his hometown, but only after getting the approval of the king of the region to recognize him as an independent lord. It means that this king has no rule over him, and he doesn’t try to conquer the land in turn. Seems like a reasonable exchange, but I really didn’t expect the show to just move this fast story wise. You can tell a lot of detail is being condensed in such a short time, since the whole “I must free my hometown” plot point comes out of nowhere. In previous episodes, Theo is just a dude that got a crest, a hot girl and a castle then defeated a bigger dude for no reason. Now, I think the show is trying to establish him as a character. Good for him. With the rush storytelling though, I don’t think he can ever climb out of his bland MC role though. 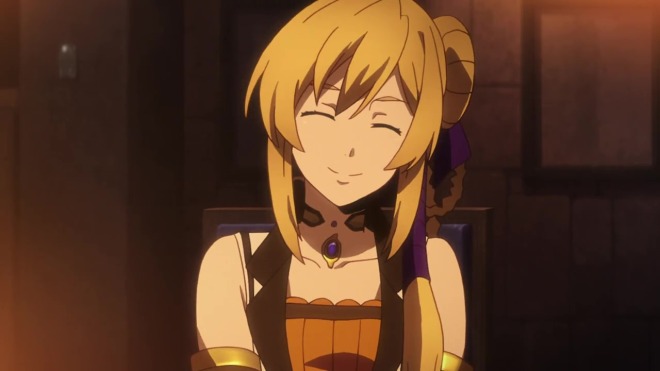 But hey, Siluca is finally fulfilling her role as a damsel. Dammit, I should’ve picked that for the predictions. She was saved by Theo after she defeated a rogue Chaos monster. It attacked a castle town, whatever that means (is it inside his castle?), and Theo immediately tried to save the folks from the monster. He did jack sh*t though, as he plays the role of a hero worse than me in the prediction games right now, but we all know the hero rises up at the right moment. For now, he’s sh*t. He rushes in for no reason, endangers everyone with his blandness, and every other character out stages him. Siluca defeated the monster, so Theo was really just there as a plot device since his relationship with the girl needs to blossom. 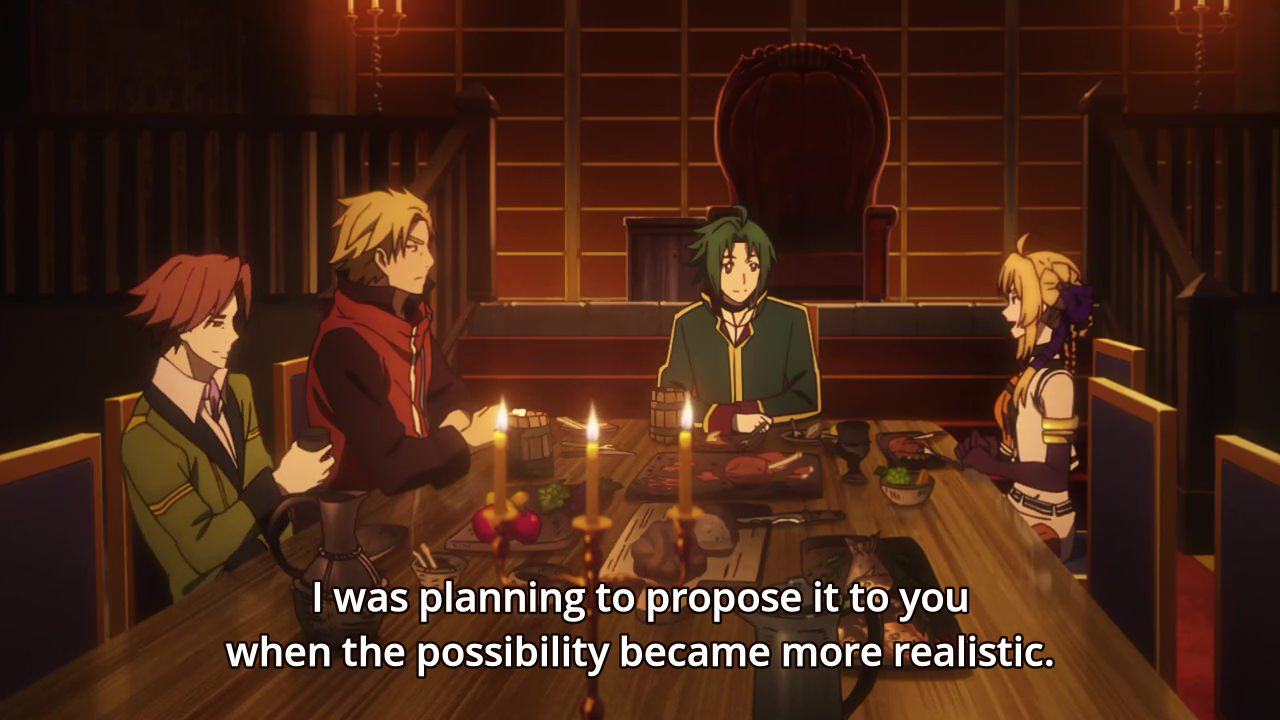 Siluca was grilled by the old mage dude though, because she is scheming too much without her lord’s approval. Why are you calling her out? She is awesome. Do more scheming and planning, because she’s really good at it. But to highlight the awkwardly rushed pacing of the show, this character development scene transitions into war when the king of the region assembles his army to defeat Theo. He is apparently mad that a lord even asks him to act freely in his region. Theo’s army has no chance against the king’s army, unless the “free lords” of the region joins him in the battle. No idea who they are, or even the scope of the anime since the show isn’t doing some proper world building, but sure, single lords looking for a hook-up is Theo’s saving grace. The single-but-looking-for-a-relationship lords might not come to his aid, but the castle townspeople that he previously saved does. Apparently, he only needed ten or more people to join him. He unites all his allies under one literal banner, which looks awesome by the by, and he gets ready for combat. 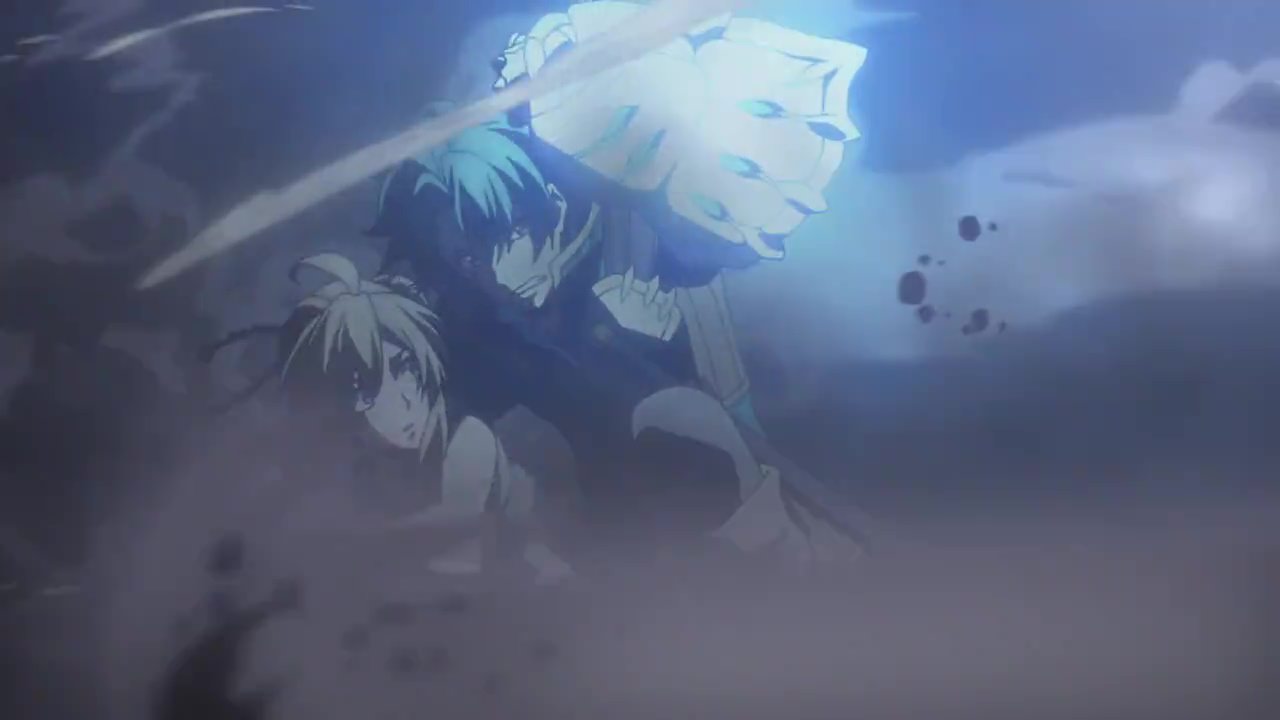 As I said before, the third episode will be the true test of whether this anime will be good or bad. I’m seriously mixed. I hate the rushed pacing and zero world building, but I like the talks of strategies. I also like the war, because it gets brutal. Random people are beheaded, arrowed to death and a guy even had his limb chopped off. All of these scenes are featured in all their brutality, which I like, but I find weird considering the unusual tone of the anime. The king lost though, but he escaped, and the single lords seemed to be united under Theo. The anime ends with Siluca meeting the bride in episode one, and it seems Theo’s plan to join the Alliance is going smoothly. Again, with the rushed progression, it seems anything can happen in the next episode.

Notable Characters of the episode: Theo gets some points here, since he’s finally being recognized as a leader that’ll rule people.

I also like that Chaos monster. With the show’s rushed pacing, I can only like characters that get the spotlight. This enemy did, and he was awesome.  He even died awesome with that “take as many as you can with you” mentality of his.

Predictions! Whelp, I’m losing early on, so f*ck it all to hell. I must point out though that the group has agreed on stacked predictions. Even if my predictions in the last episode didn’t happen, they’re still in play until the last episode. So even if I’m trailing behind on points, my predictions can pile up to give me an advantage over the others. This isn’t a sprint, it’s a marathon.

Character related: Someone will get beheaded

There’s not much to talk about in this episode of Yuru Camp. Nadeshiko and Rin just got together and ate some hot pot. The entire episode is about Nadeshiko crashing Rin’s camping, but it results in a pretty cute experience between the two. The quality of the animation seems to have dipped, but I’m not really sure. I just wasn’t wowed as much by the episode compared to the previous two. I think it’s just the combination of Nadeshiko and Rin being a bit underwhelming. Even the eating scenes don’t top the awesome ramen eating scene of the first episode. Nadeshiko is a bit derpy here, while Rin is reserved when eating. She did take a big mouthful of the gyoza, and that was cute. I just think the animation and the sound quality didn’t come together to make the eating scene as impressive as it could be. The episode is more about the pleasure of camping though, like eating out and waiting for the sun to rise. 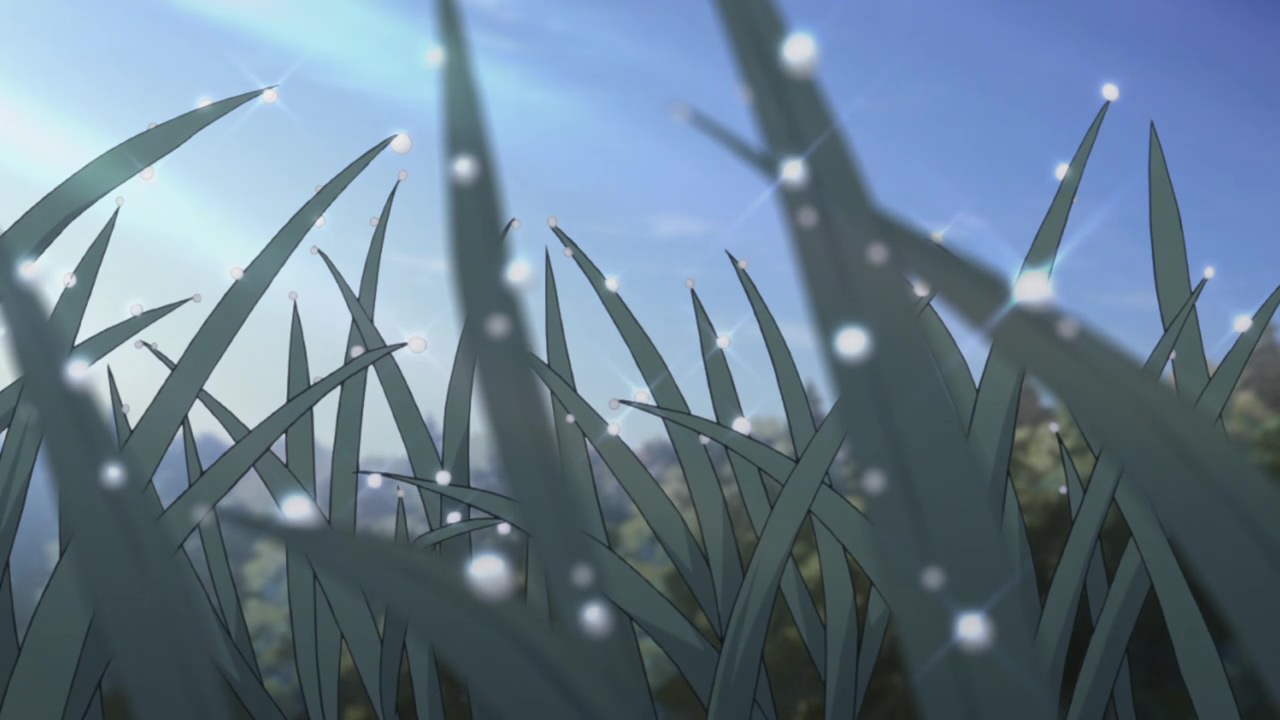 Again, the sunrise felt underwhelming compared to the moonlight showcase of Mount Fuji in the first episode. I like one shot of the dew being awoken by the sunlight though. That was a nice touch, since the sun is slowly waking up the world in that beautiful shot. I also love Nadeshiko being too out of it to really enjoy the sunrise. She goes “it’s too bright”, and that’s cute. I know people that do that. They try to wake up at an ungodly hour to watch the sunrise, and then they’d be drooling on a bench while the sun slowly wakes everyone up. We did get a cute scene of Nadeshiko inside Rin’s tent though. 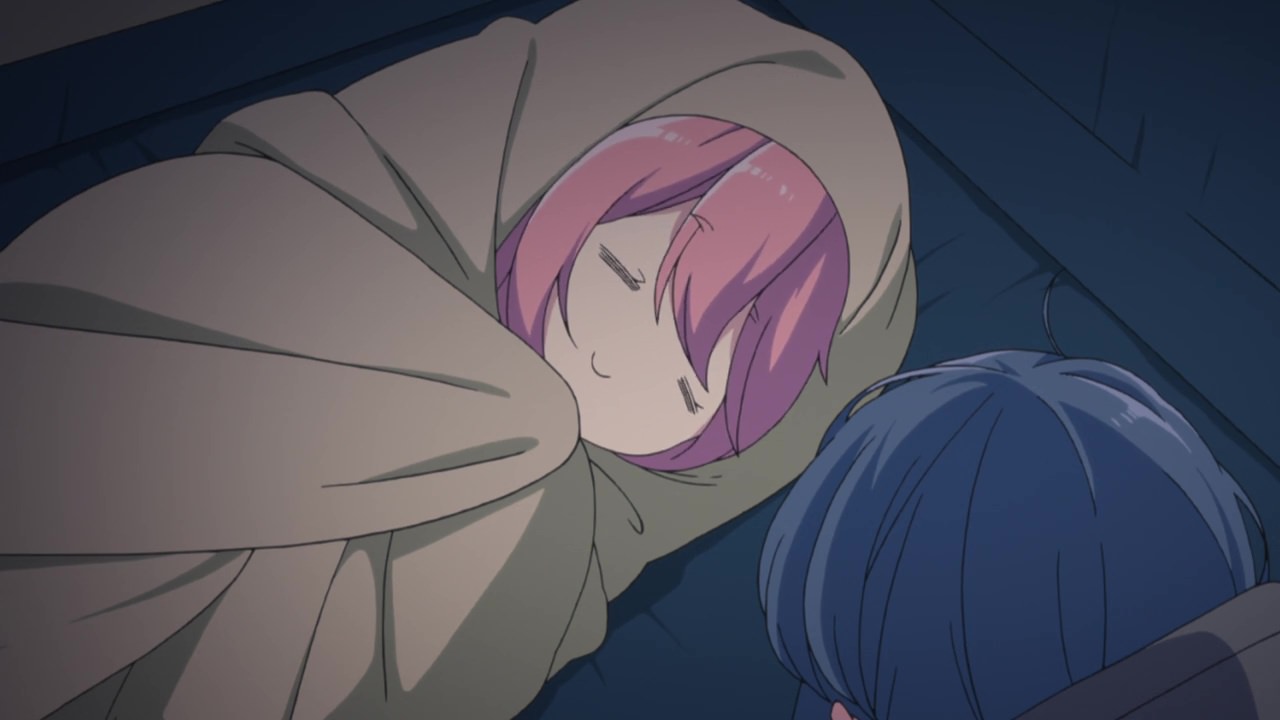 Let’s list down the best moments of this episode though:

My prediction game seems to be too good, but with the stacked rule I think I’m fine. Again, with no story to really go off on, prediction will be a bit challenging.

This anime finally had an OP sequence, and what the f*ck did I just watch? It does evoke a Meganu-bu feel to it, and I honestly did not like that anime. The way the characters are being chased by girls kinda exposes how painfully one dimensional they are. Like “hey, what are the characters like?” and the only thing you can say is that they like Sanrio mascots and they’re handsome. “That’s it?” Well, yeah, the anime tries to hammer the handsomeness by featuring them shirtless and having girls chase them. Isn’t this anime riveting? A true f*cking masterpiece. Gawd, I feel really insulted by this anime. As a guy that reviews anime, praises the most basic but well executed elements of a show, the fact that this anime is wrong on so many levels feels like a slap to the face, but then immediately remedied by placing a Hello Kitty on my face. Ah, ok, look, the anime’s weakness is slowly being exposed as the show progresses. In this episode, Yuu has this beef with his little sister. 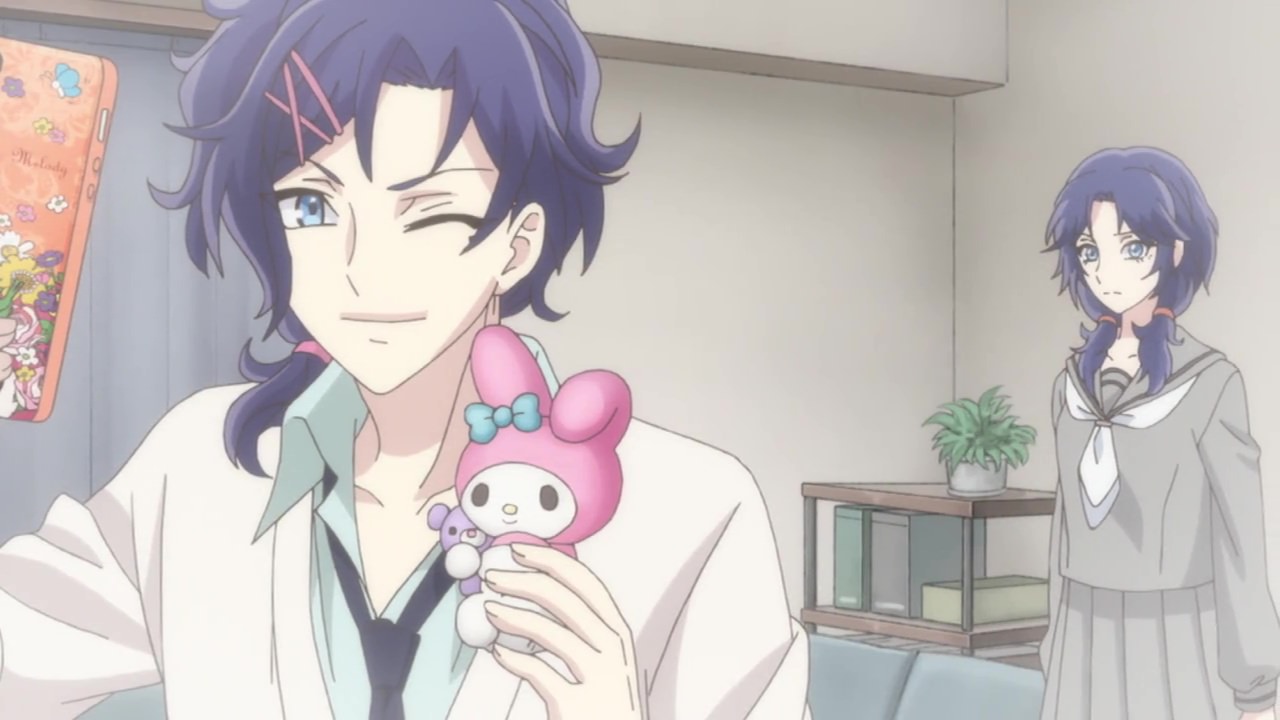 The conflict is forced, the resolution is lazy and the episode itself is just dull. The little sister seems to be annoyed that Yuu keeps cooking her breakfast, and Yuu feels under appreciated by her. She is especially mean, but I legitimately like her. She is the only character that seems to display some good set of balls in this anime, and I side with her more when she quarrels with a person wearing a My Melody apron. Yeah, scold that gay ass b*tch. But again, the conflict is completely trivial. She doesn’t eat your food? Then don’t cook. “Oh noes, no one will take care of the household if I don’t do it”. Then f*cking don’t. Your parents didn’t tell you to do that. It’s their problem. They’re the adults that left a bunch of high school kids to take care of themselves. This kind of setup is common though, but if it’s such a big deal then let the adults solve that problem. You want to go out and have fun? Then f*cking do it. Let your sister cook and do the laundry. She seems capable of that. So, does this completely idiotic conflict deserve a dramatic argument with one person wearing a cute apron, him storming out and the little sister chasing after him? No. Absolutely not. You’re forcing conflict, and it shows how lazy the people behind this anime are. 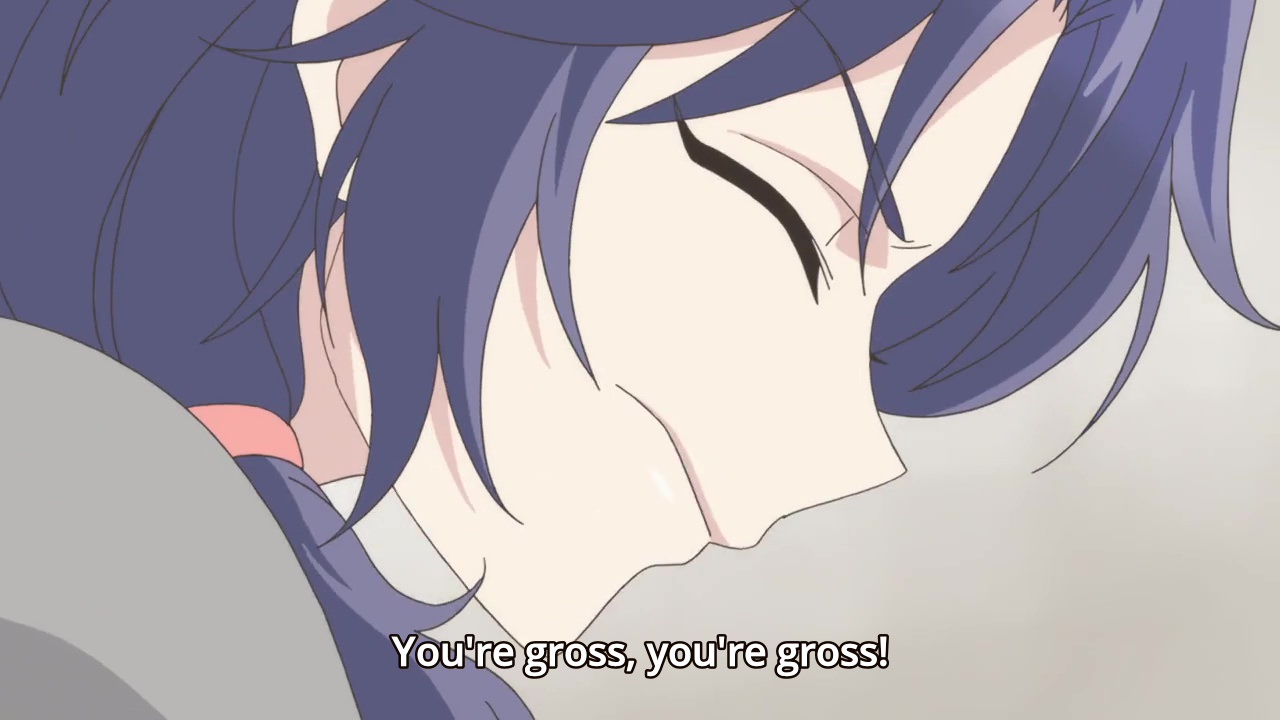 We got another fourth wall break though. When Yuu was shopping, he picked up some meat about to be picked up by another person, and he decided to break the fourth wall right there. “Oh, is this your meat?”, and he gives a creepy smile to this stranger. He broke fourth wall, so I went “yeah keep it, just as long as you don’t talk to me, sir. Thank you. “ 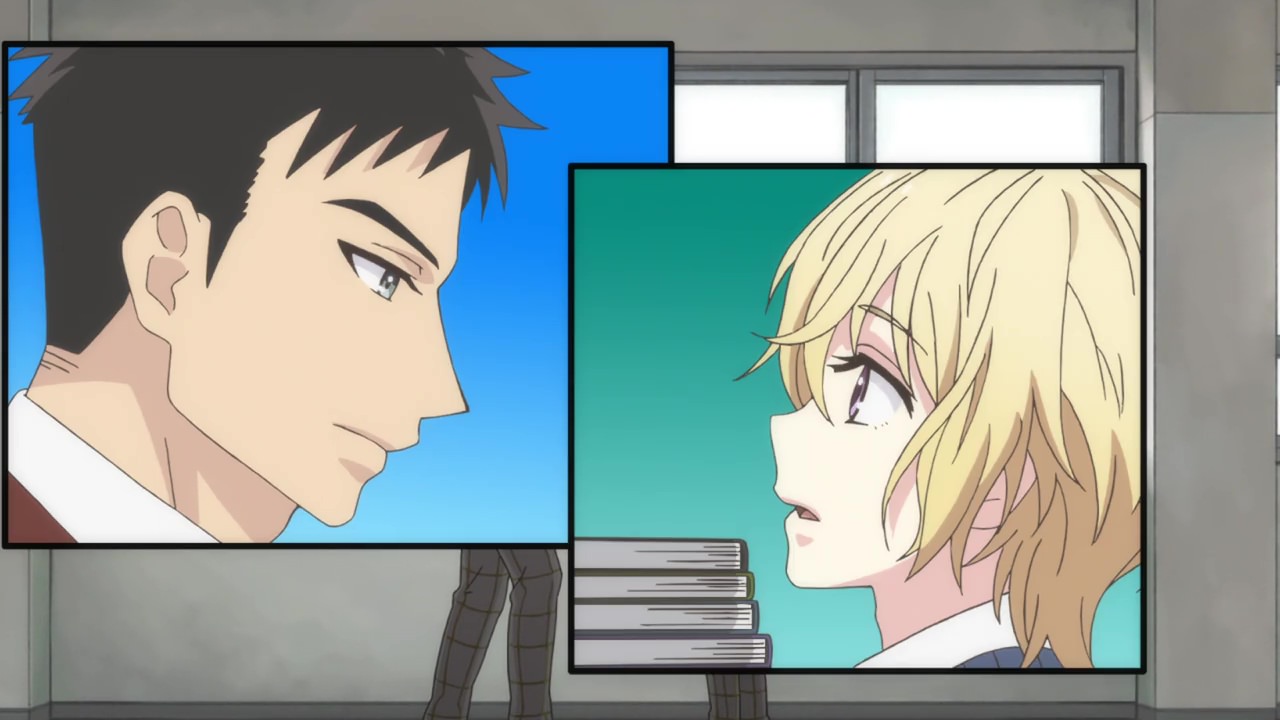 What’s up with them? I do not have the energy to care. Let’s just move onto the predictions.

Plot Related: Shunsuuke’s teammates will have an issue about him liking Hello Kitty.

Character Related: A character will break the fourth wall and talk to the audience.

I am doing awful at the prediction games at the moment, so that’s my situation. This is a fun collaboration though, so I can’t wait to make a heroic comeback at the final minute. But for now, check out the other participants post and read their early bragging below. 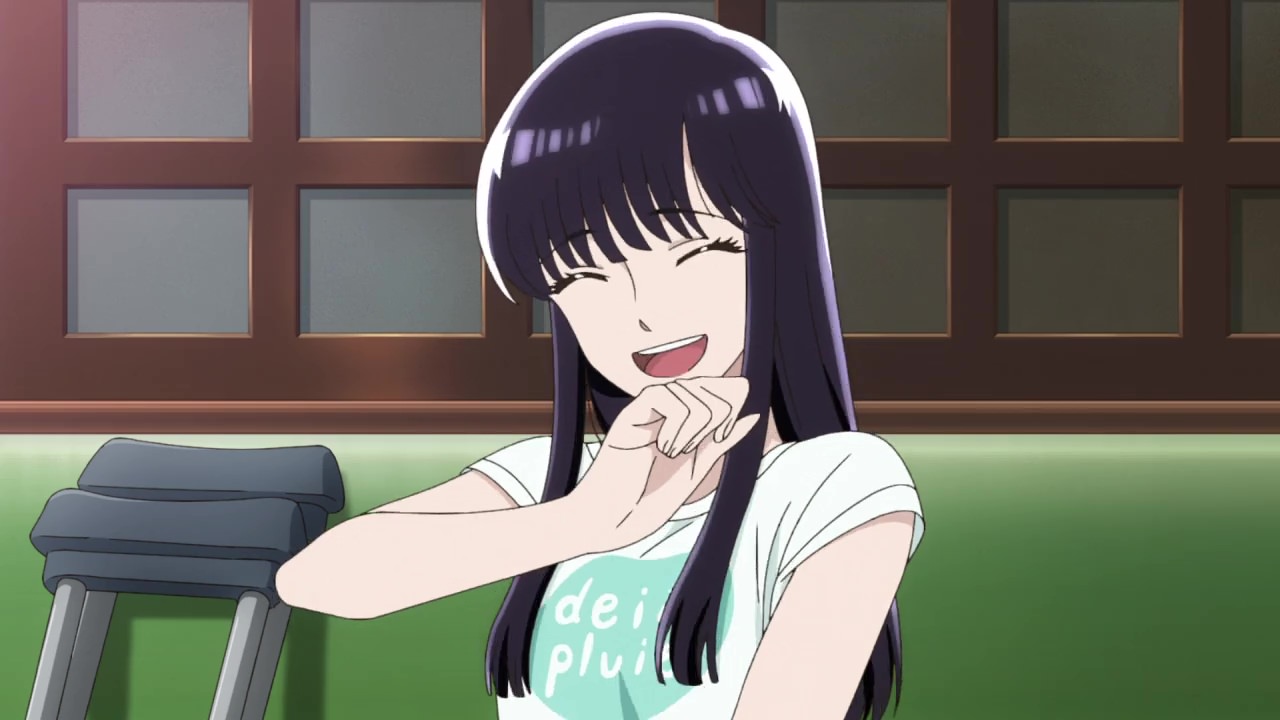 Also, I’m doing a collaboration with Keiko from Keiko’s Anime Blog, and we discuss “Koi wa Ameagari no You ni” or “After the Rain”. It’s a romance anime with an interesting age gap, even horrifying for some people. It’s a high school girl having a giant crush on a forty five year old guy. Something you’d watch? I’m guessing “no”, so just check out our deep discussion on the episodes HERE and HERE.