This is review number one hundred and eighty seven. The anime I’ll be reviewing is part of the Winter 2012 lineup. It’s a three minute anime called Yama no Susume or Encouragement of Climb. It’s twelve episodes but it’s very short. Don’t let the short run fool you because I gave this anime a very high score. Yes, it’s that awesome. So let’s read on.

The anime is about Aoi Yukimura who is pretty much a loner. She enjoys spending time by herself and doesn’t really have a lot of friends. One day, she meets a child friend and she was suddenly dragged into climbing mountains like back when they were kids. This little loner is about to experience things she probably would never have if she was still stuck in her room by herself doing crafts. Hiking mountains, socializing with people and rediscovering her longing for friends is a healthy change for this little loner.

This anime is a short one. It runs for only three minutes per episode and it is pretty worrying at first. I’ve seen five minute anime fumble hard at presenting a thought. Most anime that runs this short mostly involve a skit with a gag, some punch lines and anything else of that sort. They’re good for killing off some minutes and it’s pretty understandable that they don’t really have strong story. They usually just have a central theme that the anime repeatedly pokes fun of and it does work wonderfully. They are able to make the most of their time and entertain viewers in the process. Can you imagine an anime that runs less than five minutes and focuses not on cheap laughs but an actual story? Yama no Susume attempted that and it succeed on that goal in just three minutes. I can tell you right now that this anime is rare. There aren’t a lot of anime that runs for less than five minutes yet still builds a story that can keep you watching. It’s also a first me. This anime is pretty amazing.

The anime has a pretty simple story. It’s about this reserved girl meeting her childhood friend and encouraging her to try and climb mountains again. When she was a child, she is obsessed with mountains and she shares that passion with her childhood friend, Hinata. Aoi has changed though. She has become an indoor kind of person that prefers to be by herself. Hinata is persistent though. She still loves mountains and she would drag Aoi back into her lost passion. Most of the episodes simply revolve around the girls talking about climbing mountains or simply just spending time together. The anime is Slice of Life so there’s not a lot going on here. The characters simply just do activities together like talking, cooking or shopping for mountain gears. The limited time actually worked great for the story. Nothing is dragged. Most Slice of Life is dreadfully boring but with only three minutes to waste, the show was able to be interesting up until the very end.

The anime has mountain climbing as a backdrop. To be honest though, the characters are hiking rather than mountain climbing but I won’t get into semantics. There is a very light talk about mountains in the anime and the people with the passion for it. There are some episodes about the tools you bring during mountain climbing, the food you should eat, the kind of bag packs and tents you should have and different kinds of mountains in Japan. The anime doesn’t go balls deep in them but there is enough for the girls to talk about without alienating the audience.

While the mountain talks are very lightly served, the theme of friendship is indeed a focus in the anime. Aoi is a loner slowly regaining her socializing skills. Majority of the anime revolves around her and the things she is rediscovering after being alone for such a long time. Simple stuff like depending on a friend, talking to people and enjoying the company of others are among the things Aoi rediscovers in the short time of the anime. Her easily flustered personality and nervousness is something I can also oddly relate with. The cute experience of being reintroduced to society after shutting yourself off for a long time in your room is something both me and Aoi share. She’s not an otaku though and she’s not real so clearly I need to reevaluate my life.

The characters in the anime are pretty simple. There are five with two of them being the main characters. Aoi is the lead and she is adorable. She is the shy type that secretly does her best for others. Hinata is the energetic loud type but also cares for others. The cast are all pretty one dimensional but the limited time does hinder their growth. The rest of the cast is the simple stereotypes that move the anime along. There are two more girls introduced and Hinata’s dad that plays some minor role in the anime. I am pretty impressed at the gradual transformation of Aoi though. She was the main focus of the anime so I shouldn’t be surprised but considering the limited time frame, it’s a great achievement for the anime. 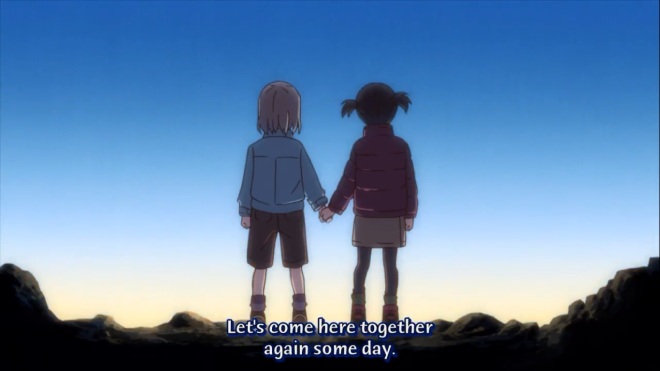 To be honest, I am a bit pissed at 8bit (the studio) for playing this one safe. This anime is a strong Slice of Life that can easily be enjoyed so it deserves a regular anime format instead of three minutes. The laidback approach of the anime is actually reminiscent of strong Slice of Life anime like A-Channel or Tamayura Hitotose. It’s the kind of Slice of Life anime that despite the slow pace, it has enough intrigue to keep it fresh through and through. 8bit should’ve pushed for a twelve episode anime with a twenty four minute runtime because the show is really good. This put every other less than five minute anime to shame. They are mostly low budget stuff and it makes sense because why put effort on something one man can seriously do by himself? Yama no Susume has very good quality worthy of a regular anime format. It’s a bit sad the studio doesn’t see the potential that they created.

To be fair, I do understand Slice of Life anime always have a stigma of being boring so I can’t be too hard on them for playing it safe. Plus the idea of moe often repels close minded anime viewers. They created something pretty amazing though and no one can deny that. This is an amazing and I really urge everyone to try it. Some thing as great as Yama no Susume should be seen by everyone because this kind of anime is rare.

The character design is pretty simple. The characters have the cuteness you’d expect from Slice of Life anime and they look massively generic. They don’t really stand out in terms of design but I am a huge fan at the detail work for the characters. Something that runs for three minutes have the option not to even try to make beautiful characters yet the ones in this anime are so very expertly made. I love the big expressive eyes of the characters and they have a great look to them. I know the manga design is more loli so I want to shake the hands of the person that did the character design. It reminds me of Vividred because the characters are cute but they are also sexy. The way the character’s slender bodies are greatly complemented by their stylish clothes really enhances their great features. I love Aoi because you can dress her in anything and she’d always look sexy. It’s a simple body type that has great curves. I’m a fan of the design, for sure.

The animation is also pretty simple.  The fact that most “less than five minute” anime are flash animated, this anime might be the most high quality anime of its kind. It has smooth transitions and the frame rate is high. You can see the movement is very precise and I love the attention to detail in most scenes. I love how Aoi would act nervous. The animation did her justice. The way the characters do their simple movements are very precise and it really made the experience pretty special.

The background in the anime is pretty amazing. Slice of Life anime always have great backgrounds and this one is no different. The bright color palette coupled by the great details of the scenes is very nice to look at. Most are hand painted scenes with digital touches to enhance it further and you can just really feel the view coming alive from how the anime presented it. The scenic shots are amazing and the simple scenes of the girls hiking have great quality to it that it makes you want to watch more.

The anime has no OP. The anime’s ED is “Staccato Days” by Yuka Iguchi and Kana Asumi. It I sung by the two main characters in the anime. It’s a nice vibrant song about spending time together. It’s pretty simple with the song having a nice catchy beat to it. The ED sequence features some images related to the episodes. Every episode has a different image and it’s pretty awesome because they are pretty nicely detailed images that capture the art of the anime. It ends with a CG cloth (?) closing the scene like a stage hand lowering the drapes.

6/10 “A strong Slice of Life anime about friendship and a cute hobby.”

This is a great show that nicely captures the appeal of a Slice of Life anime in just three minutes per episode but has a high quality that’ll make you want to watch more of it. It really never gets boring when you watch this anime. If you love Slice of Life anime with cute girls but just long enough to deliver its point across then you’ll love this anime. I highly recommend it.

One thought on “Yama no Susume Review”