This is review number one hundred and fifty eight. It’s part of the Winter 2011 lineup. The anime I’ll be reviewing is Onii-chan no Koto nanka Zenzen Suki Janain Dakara ne!! or “I don’t like my big brother at all!!” and judging from the title, it’s going to be an incest anime. Or is it? It’s a twelve episode anime about two siblings flirting around and such. Or is it?! Let’s read on.

The anime is about this boy named Shusuke Takanashi. He has a little sister named Nao Takanashi. Shusuke is very fond of peeking at his sister’s underwear and she enjoys teasing him by flashing her panties. The two certainly has an incest relationship but they don’t act upon it. Shusuke thinks her sister is an innocent girl who would never accept his love and Nao is afraid of what people may think of it. Imagine her surprise when she discovered that they aren’t really related. Will they finally act on their love?

This anime promised incest. It’s a romantic love between blood related people. Brothers loving their sisters and vice versa is pretty extreme but it’s been gaining traction in anime for a while now. The reactions are the typical reaction to anything extreme as this. It’ll be met with shock, rejection and disgust. Most times, it’ll be welcomed pretty openly. I have never reviewed a really incest anime. OniAi promised incest but it just couldn’t focus on it for some reason. This anime had a better set up of the incest. I’ve reviewed a lot of anime but never one that is truly incest so I was really looking forward to this one. The anime does have incest but it’s the same as OniAi. It doesn’t want to focus on it. There first few episodes where pretty freaky though. A good incest anime should really freak you out. This anime almost had me but it really isn’t incest.

Well, they didn’t. The incest went away after the first episode. There were a few in the second episode but it was soon shoved to the side in the rest of the episodes. Why? The anime isn’t really incest. It’s a Comedy/Ecchi/Harem anime. It’s just another one of those superbly perverted anime with girls throwing themselves at the main character. This one shamelessly dangled the incest carrot to lure viewers in. Well the incest was going well until the anime shifted focus. The first half pretty much introduced all the girls Shusuke will be involved with. The typical Ecchi scenarios commences where the guy gets a lot of alone time with the girl, they bond, the main character does dirty things and thinks of indecent stuff and the girl likes him for who he is. The Ecchi in the anime does get better as the anime progresses. I guess some people will like the fact that the incest was also shoved to the side. There is nothing uncomfortable in the rest of the episodes. Everything is the same Ecchi route we’ve come and known. Oh wait. I lied. Things get progressively worse after the incest was toned down. 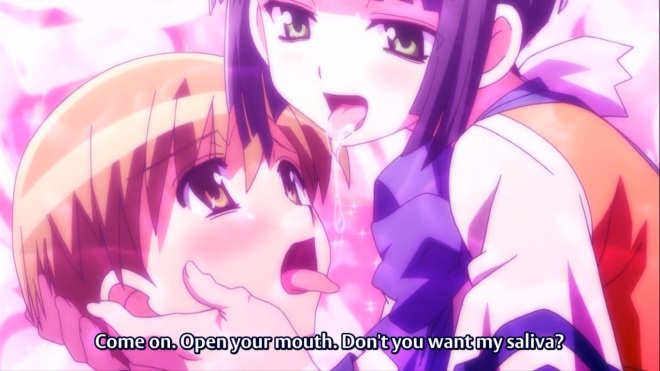 This anime is just like R-15 or Hen Zemi. It isn’t really about the story because it puts more emphasis on the Ecchi. An anime that starts out as incest soon goes off track to discuss a lot of pretty dirty things. I admittedly find some of the erotica in the anime pretty funny because of how other characters react to it. The shocked faces of characters are they learn about yaoi is something that never gets old. I really lost myself when the characters ran in fear after they discover a magazine about eels and little sisters. The Comedy in the anime is pretty brash. There’s nothing subtle or safe about it. It’s very deep rooted on the Ecchi because it pokes fun at erotica and the people that love them. Your first reaction will most likely be shock, rejection and disgust. If you can’t get over that then this anime isn’t really for you. A little open-mindedness can go a long way though. There is something pretty brilliant and original on how the anime presented its content. I like it.

I really admire the anime though because deep down, I can relate. The characters do a lot of things I used to do. The embarrassment in buying dirty magazines, this bond you form with your friends over porn, hiding in my sheets after seeing a yaoi and many more stuff like those are something I used to dabble on. I’m sure there was a time when people were also curious about certain fetishes and the anime was pretty great at displaying that curiosity. It’s a curiosity that grows into something bigger and a bit unhealthy. The anime was able to portray that awkward and disgusting phase really nicely.

The characters in the anime are pretty one dimensional. The show doesn’t really have a story to feature so the characters mostly stick by their generic personality. The point of the show was to deliver some Ecchi and the characters were pretty useful on that end. Shusuke is a shameless d*ck that is pretty open about his fetishes. There were some scenes that I think he violated something but there are also some moments where he was pretty brilliant. He’s like most Ecchi main character though. He’s honest, perverted and girls are attracted to him. His biggest draw though is the fact that he has a lot of fetishes. It was also explained that he was in a stage where he is curious about a lot of things. He wants to try different stuff and he would often move from one obsession to another. It’s one of the reasons why the incest died out. It’s just a phase of his that he needed to get out of his system. As the anime progresses, he tried a lot of things from the conventional to the hardcore.

The rest of the cast is generic as well. The thing that makes them stand out is that they also embrace some form of erotica. I was shocked that even the girls had their own fetish because most Ecchi anime try to make the girls look pure yet rowdy. This anime doesn’t do that. The girls are pretty direct, obsessive and perverted as well. It’s also the reason why they are pretty fun to watch. I laughed at some of the scenes involving the girls and I’m sure one will stick out in your mind as you watch the anime. Without a story though, some girls are often pushed to the side for other girls to take up more space. The little sister had a lot of screen time and effective roles in some of the episodes while the childhood friend of Shusuke eventually loses her place in the anime as the anime progresses. The way some of the characters develop is also pretty sad because you were hoping the anime would explore more on the girls trying to get Shusuke’s affection. The second half started out with that, actually, but slowly spiraled into an anime about fetishes. The anime had a small cast though and they were able to stand out in episodes they are featured in. Even though the perverted friends of Shusuke and the two friends of Nao had little screen time, they still had their moments in the anime.

This is one of those super Ecchi anime that isn’t for everybody. Its content is a bit extreme and I know people that hate the slightest bit of fan service in their anime so a show entirely dedicated to pushing the boundaries of perversion is certainly not for everyone. It had a lot of surprises that I really enjoyed though.  It may look trashy but the way the anime executed its elements and used its theme is pretty impressive. Most Ecchi would just be satisfied being dirty. This anime made sure everything had purpose and I like that about the anime. I hope you’ll like it too.

The first thing you’ll notice about the anime is the weird character design. It’s like a weird combination of Lupin the Third and One Piece. The characters have skinny bodies but they have large hands. They mostly look like skin and bones that looks pretty unappealing. The way their clothes also drape their body is pretty freaky. It’s an unconventional type of design that is hard to get used to. You’ll eventually get used to it though because even though the bodies are weird, the faces are pretty decent. The anime has a lot of close up scenes too and the characters all have pretty faces. The big colorful eyes and the decent shape of the face are attractive. I enjoy staring at those faces. The ears a bit big though. I like big ears, it’s one of my fetishes, I suppose. It takes a little getting used to them as well though. Don’t let the character design turn you off though. The content is much worse.

Despite the weird character design, the fan service is still served pretty strongly. Majority of the fan service involves the girls flashing their panties. The censored version of the anime is annoying with its censors. It has big pictures of animals to cover everything. The anime has no story so shoot for the uncensored version. I easily obtained it without even looking for it so just search hard. The panty shots range from the typical colorful panties exposed by the low camera angle to blatant fully detailed shots where you can almost see the lips. The panty shots are pretty blatant though and they are mostly unwanted elements of the anime. Simple scenes of the girls sitting down or standing up had a slip of panty shots in it and it looks stupid.

The anime’s OP is “Taste of Paradise” by Eri Kitamura. It’s sung by the little sister and the song is mostly about the incest and the erotica of the show. ‘Who says most desires are evil?” is one of the lines of the anime and it constantly talked about the little sister’s delusions and such. The song is pretty ordinary. I’m not fond of Eri’s voice but her voice is pretty decent. The OP sequence is just some cute scenes about Nao and the other girls of the anime. oh, there are also some panty shots because why the f*ck not?

The anime’s ED is “Ari Ari Mirai” by Eri Kitamura, Marina Inoue, and Kazusa Aranami. It’s sung by the three main girls of the anime. It’s about the girls confessing their love. It’s a cute song but it’s pretty ordinary much like the OP. The ED sequence is about the girls in some poses acting all cute and stuff. I do love the lip sync is the sequence. It’s pretty decent.

6/10 “It’s an anime about erotica and other things that will make you shocked, disgusted and reject it yet something incredibly enjoyable.”

I’ll say it again, it’s not for everyone. The amount of dirty topics in the anime and the shameless display the characters does will certainly not appeal to everyone. In how it executed its theme and genres, the anime is pretty impressive. It’s a really good Ecchi anime. I recommend it.

7 thoughts on “I Don’t Like My Big Brother At All!! Review”