This is review number one hundred and two. It’s still part of the Summer 2011 lineup as I wait eagerly for the Fall 2012 lineup to end. It’s already halfway through so it’s getting exciting. The anime I’ll be reviewing though is an Ecchi anime called Manyuu Hikenchou or Magic Breast Secret Sword Scroll. Yeah. It’s a twelve episode anime full of boobs.

Seriously, after seeing this anime, I don’t want to see another pair of boobs for the rest of the month (because I’m sure another Ecchi is lying in the corner waiting to be reviewed). This anime is full of boobs. Boobs, boobs, boobs, boobs, and more boobs. Let’s read on. 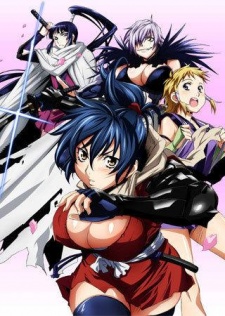 The anime is set in the Edo period of Japan. It’s a world where boobs are the ultimate authority (seriously, boobs. its boobs.) The bigger they are the more you are respected as it is believed to bring good fortune. If you’re a flat chested woman then you should be ashamed because having a small chest is considered to be bad and disgusting. You’re basically at the bottom of the totem pole if you’re a flat chest. In the Shogunate (like the government), there is a clan that secretly controls the inner workings of the country. They are said to know secrets about developing boobs and they have gain a favorable position in the Shogunate even being tasked as the official boobs examiner of the country. They are the Manyu clan. The supposed successor has defected from the clan though, stealing their secret scroll that the clan treasures. Chifusa Manyu has had enough of the stupid societal discrimination against boobs and has decided to vanquish the stupid idea of a world ruled by boobs.

I’ve always believed that Story and Ecchi don’t sit well together. It’s either you’ll get a mediocre story with a lot of fan service or you’ll get a great Story with very little fan service. There is no way a great story can be paired with a lot of fan service. Or so I thought. I love being wrong and, once again, I’m wrong on this one. I now think Ecchi and Story can mix together but it also depends on your preference. As an unbiased reviewer though, I’ve actually found an Ecchi anime that I enjoyed because of its story. It sounds so absurd even to me but Manyuu Hikenchou has a great story piled in with some excessive Ecchi.

First of all, I’ll be typing boobs so much that you’d laugh. Secondly, this anime is a massive Ecchi that it slowly borders on Hentai. The way it pushes the boundary to it’s edge is insane. If you want to really “enjoy” the anime then check the uncensored version. I kid you not; the amount of censors in the other version robs the anime of its full potential. The Ecchi in this anime involves a lot of boobs and panty shots. The panty shots don’t have any flare to them because the characters mostly wear up to date undies so it lacks a bit of excitement. The amount of boob perversion though is unbelievably high. It ranges from boob grabbing, boob massaging, exposing the nipples, waving the boobs around, exposing boobs in public, motorboating, rubbing each other’s boobs, sucking the boobs, licking the boobs, playing with the nipples, secreting breast milk, and simply touching them. Yes, almost everything you can possibly do to those pair of god sent twins is explored in the anime. The anime even had a tentacle scene:

If you’re not a fan of excessive perversion then this anime will not appeal it you. It will turn you off in mere seconds. Literally seconds because the first few seconds of the first episode involves a huge breast being exposed and played with. Now wait a minute. If the Ecchi is that damn powerful then how the hell can it have a great story?

That’s the great thing about the anime. It has a really nice setting to it. Boobs rule the world and society has hammered the importance of having big boobs on its people that it affects their lives. The anime gives us a nice look at a society completely ruled by boobs. The shame of losing the treasured twins, the pride of equipping massive knockers and the way boobs are used to judge a worthy wife for a wealthy man is nicely presented in the anime. We are given a nice look at different people and their lives being ruled by boobs. 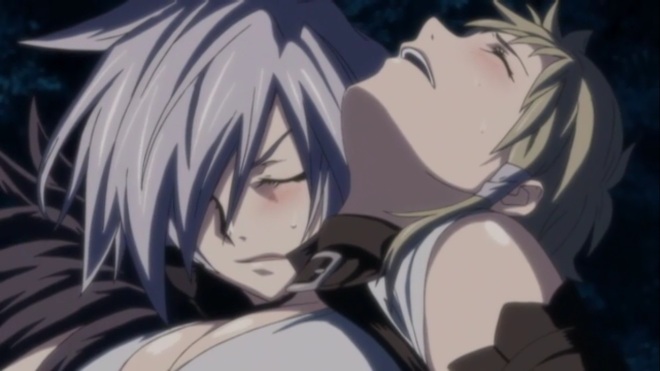 I know it sounds ridiculous as well and the anime often pokes fun of it but it’s so serious that you easily get sucked (yes, I had to) into this ridiculous premise. As goofy as a society controlled by boobs, the idea isn’t as far off from a society being controlled by money so idea has some substance to it. It also takes a huge amount of seriousness to pull of an absurd anime as this though. The balance of the seriousness with the comedic aspects of the story is nicely executed. Trust me, when a girl suddenly gets her breast cut off, it really feels serious as if seeing someone getting robbed of his wealth.

Yes, the girls in this anime get their breasts cut off. Not in a bloody way though. The anime was able to eliminate blood from the story and instead of gushing out glorious blood, the boobs simply deflate. It adds to the story of the boob centered society because a girl would face massive humiliation after her breast gets reduced to a washboard. Blood is appreciated though because the amount of fan service would’ve nicely blended with the gore. It’s like watching a 90s OVA. It’s full of nonsense, blood and perversion. (Quick!!! Google “The Abashiri Family) 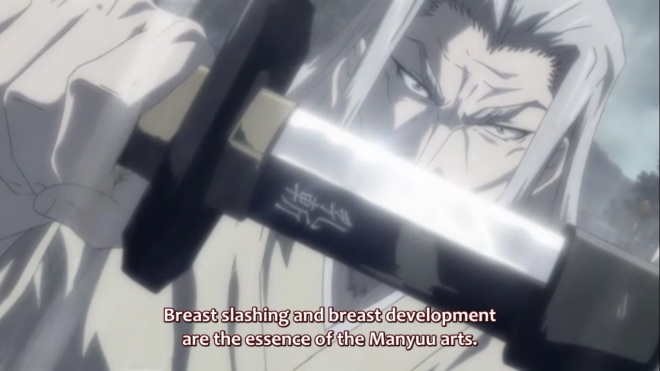 The anime has a simple format of having the two characters travel and get involved in some problem along the way. The format is similar to Ran the Samurai Girl or Samurai Champloo. The characters travel, they often has no money and worries about filling their stomachs, they meet one shot characters and discovers their backstory or problem, they get into fights and they leave after handling the problem. If Samurai Champloo was able to mix a great Story with some hip-hop urban western style then Manyuu Hikenchou was able to mix a great Story with the sick fascination for boobs.

The characters in the anime are pretty great. They’re a bit generic but with the serious story, they manage to shine pretty impressively. The two main characters, Chifusa and Kaede (her sidekick) have a pretty interesting relationship. Kaede is this flat chested girl who lives her life hoping she has some of those giant asteroids on her chest and is often the one getting mistreated by the boob centered society. Chifusa is interesting as well. She has this power to steal someone’s boobs (yeah…I know). As she travels, her boobs get bigger but she has this mission to establish a society not controlled by boobs. I love the irony. It’s like spreading peace while waving around a machine gun.

The rest of the characters are pretty nice. The one shot characters are able to hold their own as the episodes are focused on them. There are some recurring characters and they range from serious to comic relief. These minors are given a pretty fair screen time as well especially on the second half where the anime was trying to build up its final moments.

The villains are pretty great as well. They are Shounen inspired villains who has a nasty demeanor but they act a bit cowardly. The one that really stands out Chifusa’s sister she encountered on the first episode. She cuts breasts for fun and you just easily wish bad things would happen to her. The villains are given some screen time as well as the anime progress. They are no longer as bad as they were because of the circumstances revealed about them. It makes up for some awesome fight scenes though.

The pacing of the anime is one of the important factors that make this anime great. It never felt rushed and as most anime disintegrates in the second half, this anime was able to keep it together. It was able to maintain its balance of Ecchi, Comedy and Story pretty nicely. I’ve seen other anime botch their story so hard it’s not even funny. Ecchi anime do it as fast as it can expose some boobs but this anime was able to keep its appeal from beginning to end. That’s tough for an Ecchi to pull off.

The character design is really great. I particularly love Chifusa’s face as they focus on it. Her eyes are so fiery but the rest of her face is gentle. The other characters have some nice features to them as well. Some of the one shot characters often looks alike though with some minor differences like skin tone or hair length.

There are very little fight scenes but there is one for every episode. The fight scene is just a mandatory part of the anime. Some of them are impressive but some are just there to add some drama to the scenes. They often end fast and there is no storytelling to them. Seeing a boob gets slashed is pretty awesome though. 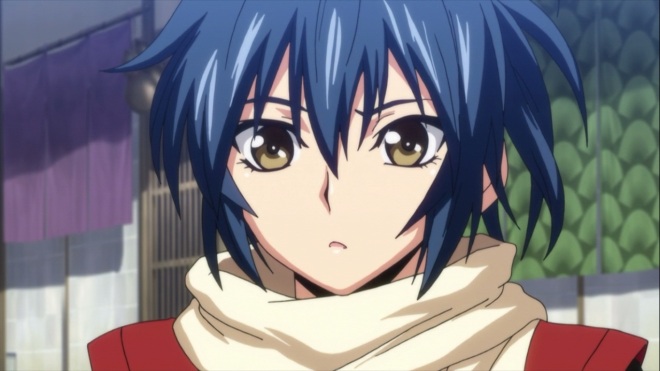 The ED is “Futatsu no Ashiato” by AiRI. It’s a mellow song with a pretty nice beat to it. It’s a fitting ending song with a nice ED sequence. It features all the important characters in the anime. It does spoil it a bit because some characters introduced in the second half is already in the sequence. It’s still nice though.

7/10 “The story is great. The Ecchi, although shocking, is great as well.”

Yeah. I can’t believe it either but as far as thinking of a great Ecchi anime, this anime is as close as you can get.  Now not all people will appreciate the perversion in this anime but after reviewing a lot of Ecchi, this is possibly the best one I’ve seen so far. I…..highly….recommend it.