Hello there. This is review fifty eight. It’s another anime from the Spring 2012 lineup and I did something monumental today. I gave my lowest score ever. How low? I don’t want to talk about it. It’s in there, just skip my rant. The anime is Hiiro no Kakera which is thirteen episodes. It’s a reverse harem otome game. Sounds nice, huh? Let’s read on.

The story is about Tamaki Kasuga who travels to a small village to visit her grandmother. While walking along this forest path, she gets attacked a bunch of evil creatures trying to take her away. She was saved by this handsome guy named Takuma Onizaki who escorts her to her grandma’s house. What starts out to be a visit turns out to be something much grand.  Her grandmother suddenly tells her that she is to live in this village as a Tamayori princess and continue the duty of protecting the seals that hides an evil being that if released can destroy the world. She also finds out that she has five handsome guys protecting her since she is now a princess. A group of suspicious people plan to break the seals though and unleash the evil from within. It looks like her life has gotten more complicated. 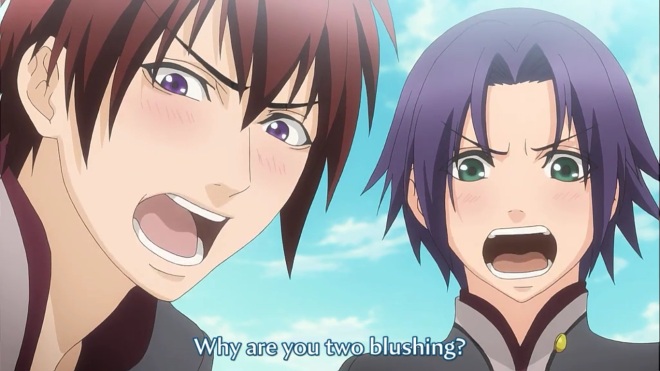 You know how some anime only gets good after episode three? It’s something I’ve been preaching about for a while now. Some anime takes three episodes to get good and coincidentally, there are some anime out there that gets worse after three episodes. I just watched one of those anime and I am so mad at how awful this anime is. I give a lot of anime a chance but some are just bad. Hiiro no Kakera is bad. That’s the end of this review.

The anime is an adaptation of an otome game of the same title. Otome games are games where you play a girl and you pursue one guy from a group of equally hot guys. There are a lot of game adapted anime like that. It has the same hurdle as VN game which is to attract new fans while satisfying the gaming fans. I haven’t actually seen one botched so hard but I guess there is a first time for everything.

The story starts out pretty normal. Tamaki visits her grandma and she suddenly became a Tamayori princess who risks her life protecting five seals that hide an evil creature inside. She has five guys protecting her and there is a bunch of people trying to break the seal. It’s pretty normal and there is a lot of potential in this anime if it was handled right. Tamaki doesn’t want to be princess and the guys express their feelings about being nothing but tools for her and they have no choice in the matter. Tamaki shows signs of being a Tamayori descendant though as she feels evil presence approaching and she can do some incantations with ease. She feels someone is trying to break one of the five seals and then they meet this group of people who is willing to open a can of whoop ass if they don’t back down. 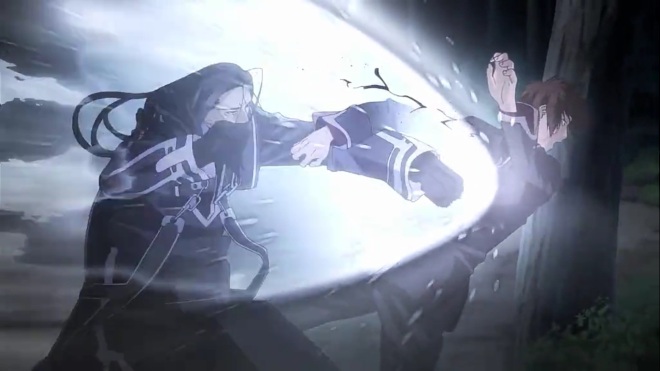 It’s all going well and I was pretty excited for the first bout between the groups. That’s where the anime also go on a downhill rampage though. They got beaten up. It wasn’t a fluke too. They were LVL 10 and the enemy was LVL 60. It was embarrassing and the enemy succeeded in breaking one of the seals. It’s Ok though because there is four more. All they need to do is train, right? Pretty boys training? As if. They attend school and say lines like “I won’t be beaten next time.” So they just eat lunch and spend the days casually. The second fight came and they were mopped to the ground. So they’ll train now? Heck no. They’ll just talk among each other and blame Tamaki for being worthless and not being to understand what they feel. Tamaki tried to find a way for them to defeat the group but the answer actually lies in her. If she became strong then they became strong. Wow.

The story suddenly became inconsistent and it drags the pacing afterwards. The anime builds some plot points and then abandons them afterwards as if it doesn’t really matter. The anime gave Tamaki a fox that hides in her shadow to protect her and not once do we see that damn thing do anything worth something to improve the story. The anime also establishes this romantic bond between two of the side characters and then never mentions it again like it didn’t even happened.

There was also a lot of plot holes in this damn anime that would make a colander proud (get it? Cause it has many holes…ugh). The grandmother was a former princess and not once does she involve herself in the story. I would think it’s OK because she’s supporting her granddaughter from the shadows. No, she just doesn’t care. She did blame Tamaki for being weak so good for her. The world is about to end and she don’t give a crap about it. There was also a point in the anime where the grandma told Tamaki that she is weak because she can’t see those other creatures. Naturally, Tamaki tried and she can see them for mere seconds but nothing materialize from it. She didn’t become stronger and those cute little creatures suddenly vanished from the anime.  The most puzzling of all is the involvement of this guy who is snacking on rice crackers and this handsome dude who seems to enjoy smelling Tamaki. Their role was never really explained and they just appeared on the shadow watching with the audience having no idea what their motive is. All this elements did nothing to improve the anime and it actually became clutter that distracts us from the actual story which is….I seriously do not know.

Oh you think abandoning plot points and utilizing pointless ones was bad. The anime also had time to introduce new plot points. Tamaki and Takuma suddenly had a romantic flag set up on episode 11 and Takuma is actually a demon trying to control his urges. Wow. You couldn’t establish that at the first half of the anime? 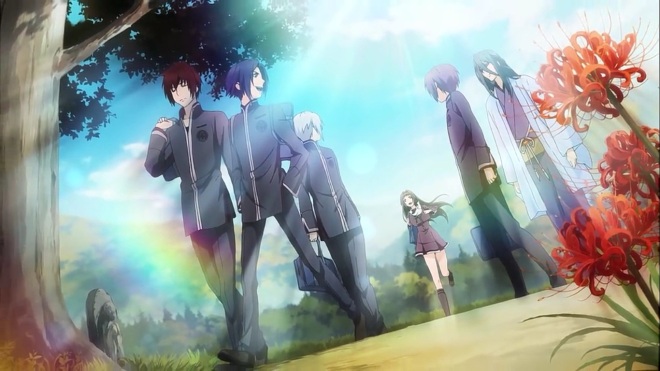 The characters are miserable failures too. They were generic and boring at best. They had no time to shine and there was no time for them to develop because the anime is busy making them weak. There was no stand out character here and they all remain one dimensional from start to finish. It’s OK because they’re bishies! They’re too sexy for character development. For f*cking shame. There weren’t even some romantic teases from this anime since it’s a reverse harem. Five guys and only one girl is a perfect formula for some blunders here and there.  The anime decided for the guys to just look pretty and not be intimate with the only girl worth being intimate in the anime. They’re gay. Even Ouran HS Host Club was able to make some guys advance on Haruhi. It’s annoying. The one time you wish a cliché could save the anime.

The villains aren’t special. They started out badass beating the LVL 10 characters with their amazing LVL 60 skills but they weren’t able to develop as well. The anime tried but it ended up confusing with the idea that one of them is trying to obtain the power sealed within. It’s no longer fun when you just see the main characters get beaten up on every encounter. It’s really depressing how strong the enemies are and how weak the good guys are.

This isn’t a review made to bash the anime. No, this is an unbiased review and I’m actually really mad that I have to write this. There is nothing good from this anime and you’ll just be wasting your time if you pick this up. The animation is good and the music is superb. Do you watch anime to listen to its OP and ED songs? F*kc that. Stay away from this anime. It’s bad. 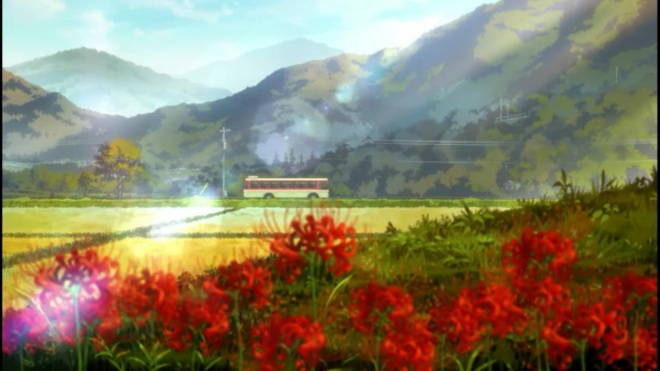 The animation and the music is the only good thing about this anime. All bad things seem to have good music for some reason. The animation was really smooth and the fight scenes were above average. The effects and the overall fight scene were outstanding if you ignore the fact that the good guys are losing. The background is also a standout. Episode one has a very breath taking scenery that excites me a bit. It’s scenery porn worthy and a lot of the scenery in the anime is really nice. The use of CG is also nice even though it’s stiff.

The character design is excellent but only because it’s the same from the otome game. The bishies are textbook definition of the word with amazing facial features and a nice build. It’s the typical tall, dark and handsome combination. Tamaki herself is pretty in her own way. The school uniform ensemble she always wears makes her standout. The little creatures that appear for a bit in the anime were also nicely created. It reminds me of those creatures from Natsume Yuujinchou.

The anime also has this scene at the end of every anime where one of the characters breaks fourth wall and talks to you, the viewers. It’s a short scene where they act like otome characters which are awkward for me because they talk as if you’re their mistress or something. “Come back here. I’ll wait for you.” I skipped most of them because it was overly gay for a guy to listen to it.

The music is also excellent. The OP which was sung by Maiko Fujita is really amazing. It had a sentimental feel to it and I really love how she cuts her voice on some of the high parts. I wish I had a voice like that too. The ED was more slow and more emotional but still excellent in its own way. It really fits the anime’s otome feel.

It breaks my heart that I would give such a low score but it is what it is. It’s an awful adaptation with a boring story that is also convoluted and uninteresting. The characters are bland and there was no scene in the anime worth talking about.

13 thoughts on “Hiiro no Kakera Review”